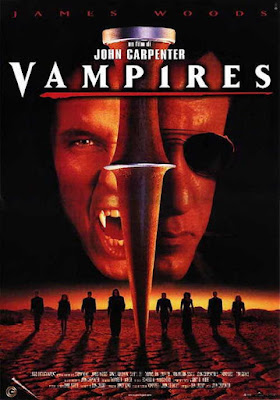 With the final installment of the Twilight saga now out, horror fans seeking some counterbalance might be craving a film slightly less sympathetic towards bloodsuckers and less interested in wooing the teen girl demographic. To that end, I recommend John Carpenter’s Vampires.

Based on the novel “Vampire$” by John Steakley, Vampires saw Carpenter indulging his long time love of westerns as hard as he ever has. This is a straight up cowboy and Indians style story with James Woods starring as Jack Crow, a vampire slayer under employment by the Vatican who leads a team of fellow slayers in a covert, Catholic Church-endorsed campaign to purge vampires from the face of the earth.

Crow and his crew do a brisk business ferreting out vampire nests and they’ve got a pretty efficient system going for wasting “goons” that involves spearing them in their nests and dragging them out via steel cables on a winch into the sunlight but when Valek (Thomas Ian Griffith), the king of all vampires, puts his boot down hard on Team Crow in a surprise ambush, killing all but Crow himself and Crow’s right hand man Tony Montoya (Daniel Baldwin), Vampires becomes about Crow’s single minded hunt for Valek.

Making this about more than payback is the fact that Valek is in pursuit of a holy item known as the Bérziers Cross that will figure into a ceremony that will give vampires the power to walk in the daylight. And if that happens, then it’s game over for humanity.

Caught up in this battle is Katrina (Sheryl Lee), a hooker who was partying with Team Crow on the night they were decimated and who was bit by Valek. Katrina hasn’t turned all the way yet but the psychic connection she now shares with Valek is something that Crow believes he can use to his advantage. Katrina is dragged against her will along with Crow and Montoya in the hopes that she’ll be able to get them close to Valek before it’s too late. Just to make sure things go smoothly, the Vatican assigns a young priest named Father Adam (Tim Guinee), an archivist for the church, to tag along with Crow.

Of course, the pursuit of Valek proves to be anything but a smooth operation and by the end of it all, loyalty and faith are tested, old bonds are severed and new ones are formed. The action in Vampires lacks the sort of state-of-the-art pizzazz that most modern action pictures strive for (released just a few months earlier, Blade offered a much more stylish slice of vampire slaying) but on the plus side, everything in Vampires is accomplished with practical gags and stunt work. Every inch of this movie is old school – there’s not a single frame of CGI to be found. The vampires are depicted with minimal makeup work and when they burst into flames, it’s not rendered with CG (something that was common even on TV by then with vampires crumbling into CG dust on Buffy the Vampire Slayer).

Much of this choice in focus is no doubt due to budgetary considerations. There was no way that this modestly priced movie ever had the means to compete head to head with top of the line, big studios action pictures but Carpenter wisely didn’t even try. Instead, he and screenwriter Don Jakoby kept the focus on the small cast, giving each of their arcs a distinct meaning.

At the heart of Vampires is the long time friendship between Crow and Montoya and how Katrina and Father Adam both figure into, and ultimately change, that once-insular dynamic. Vampires is a very profane film, filled to the brim with f-bombs and derogatory slurs. It’s been accused of misogyny, homophobia (at one point, Crow taunts Valek by calling him a “pole smoking fashion victim.”), anti-Catholism and general surliness. And, on the surface, it’s true that there is an awful lot of crude attitude on display.

Carpenter’s filmography is famously host to its share of anti-heroes with harsh demeanors but Crow is in a league of his own. Even aside from the very ungallant way he treats Katrina, the physical abuse he personally delivers to (the wholly sympathetic) Father Adam during the course of the film is astonishing. Beating the meek priest at what seems like almost every turn, for various minor infractions, he stops just short of curb stomping him (nowhere else in the annals of film, by the way, is there another movie in which the hero kicks a priest across the dirt like a dog and then afterwards asks if that savage beating sexually aroused him). And Montoya is every bit as thuggish as Crow, as his treatment of Katrina attests.

It’s hard to argue with viewers who find all of this too much to take. Perhaps Vampires was Carpenter’s retort to the rise of the PC mentality in the ‘90s. Who knows? And yet, underneath all the machismo and displays of bad behavior, there lies an unmistakable streak of sentiment. Crow and Montoya aren’t the type of men to ever sit around and talk about their feelings and yet there is a deep connection between them and their final parting scene is every bit as heartfelt as the goodbye at the end of Carpenter’s Starman. Well, that is if Starman had also ended with one character promising to hunt down and kill the other after a brief grace period. But still...

Vampires proved to be a modest hit back in the fall of 1998 but it got a lot of flak and derision as well. That’s par for the course for a Carpenter movie as, more often than not, they have to exist awhile before they’re appreciated but now almost fifteen years since its release, the scrappy Vampires isn’t looking long in the tooth at all. In fact, I see a hint of immortality in it.

Originally published 11/16/12 at Shock Till You Drop

Reading this sent me off to watch the movie again. Only saw it once when it was first out and... I'm not sure why but still didn't make much of am impression. I do like that the 'good guys' are not nice, reminds me of John Wayne in The Searchers... and Mickey Spillane stories.

Yeah, this one definitely doesn't try to soften the edges of its protagonist. Woods plays a completely unapologetic bastard and while his attitudes are appalling, I like that they just went for it with this character. I maintain that it's an underrated movie. Hope you enjoyed your second time around with it!