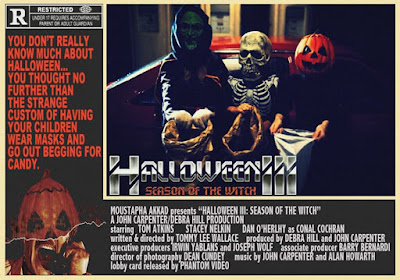 Upon its release in 1982, Halloween III: Season of the Witch proved to be as welcome with Halloween fans as Tootsie Rolls are to trick or treaters. Few movies were given the bum’s rush so quickly and so few films brought together so many fans in near universal disdain. For years, if you asked horror fans how they felt about Halloween III, the stock response would be that they hated it.

So how is it that it’s become practically fashionable to like – even love – Halloween III? Plenty of films see their reputations improve over time but the turnaround in opinion on Halloween III to the point where some fans now call it the best of the Halloween sequels is nothing short of miraculous.

The unlikely road to redemption for this once-despised film comes down to three points… One, bringing back Michael Myers wasn’t such a hot idea. HIII was reviled for having the temerity to let Michael Myers stay dead but as each subsequent Myers-themed sequel, remake and so on did little but sully the legacy of Carpenter’s classic, the more taking a second look at HIII started to look like a good idea.

I mean, I really love Halloween 4: The Return of Michael Myers but when it comes down to it I could’ve lived without it. Similarly, I know that H2O has its fans but wouldn’t you say that the world have done without it? I think so. But now ask yourself if the world could go without Season of the Witch.

Think real hard. Think until the answer is “no, it freaking couldn’t!” then you’ll be right.

That’s the second reason that HIII has found an audience over time. It stands alone. Not just in the Halloween franchise but in the company of horror films in general. It’s just an odd, stubbornly goofy, little movie.

Horror fans have seen every plot told and retold from a hundred different angles so anything that throws even the slightest curveball is going to – sooner or later – earn some love. Every element in H3 isn’t 100% original in and of itself but the fact that so many quirky, divergent components – Stonehenge! Celtic magic! Catchy commercial jingles! Killer robots! An evil toy maker! – all exist in one film gives it the advantage of being something different.

How much of H3’s story came from the original scripter, the legendary Nigel Kneale, and how much came from director Tommy Lee Wallace’s rewrites is irrelevant. All that’s important is that none of the weirdness got scrubbed out along the way.

The third and final – and perhaps the most important – reason for H3’s ascension: Tom Atkins. When H3 was released, Atkins was already a familiar face in genre films but he hadn’t quite achieved the beloved status among fans that he enjoys today.

The fact that H3 gave Atkins one of his few leading man roles makes it hard for Atkins junkies to resist – even more so given how complicated and unique (at least among horror protagonists) his H3 character of Dr. Dan Challis is.

The horror genre is host to many classic heroes – everyone from Abraham Van Helsing to Laurie Strode to Clarice Starling. But Dan Challis is cut from a much different cloth. He’s a middle-aged dad (who doesn’t seem to be all that attentive to his kids), divorced, alcoholic, and something of a lecher.

Atkins’ innate likeability helps disguise Challis’ many unsavory qualities but yet he is undeniably skeevy – which is exactly what makes him such a memorable protagonist. Atkins had already played a borderline letch in The Fog where he exchanged fluids with Jamie Lee Curtis’ character before they even exchanged names but in H3, this (at the time) nearly fifty year old took it to the next level by getting Ellie (Stacey Nelkin), the barely legal daughter of a slain shop owner, into the sack while they’re on the trail of her father’s murderer.

To be sure, Challis is not a guy with a shiny halo around his head. Aside from his appetite for bedding young women, Challis also has a insatiable thirst for booze. Before he and Ellie even hit to road to investigate the murder of Ellie’s father, Challis makes sure to make a packy run first. And when he and Ellie first arrive in the town of Santa Mira, home to the ominous Silver Shamrock Novelties factory, Ellie is eager to start digging around for clues about what happened to her dad but Challis’ immediate response to that is “Whoa! It’s getting late and I could use a drink!”

In what must’ve been a perversely deliberate move on the part of Wallace and Atkins, Challis is shown repeatedly to fail to act in a traditionally heroic fashion and when he does make the effort, he comes up (one channel) short. By coincidence, in David Cronenberg’s Videodrome – released just a few months after H3 – James Woods’ character of Max Renn was just as morally muddied as Challis, and like Challis, Renn is also thrust into the position of saving the world from deadly televised transmissions. The two films make an unlikely but interesting double feature.

Challis’ personal complexities take a back seat to action as the last third of H3 is little more than a series of chases, fights, and desperate escapes but on the other hand, you get to see Challis in a zany death duel with a decapitated killer robot so it’s all good. Thirty years on, this one-time franchise killer has earned its place as an October essential. The Captain Kirk mask may have been retired in this entry, much to the consternation of fans, but Season of the Witch still boldly went where no Halloween had gone before.

Originally published 10/30/12 at Shock Till You Drop

Great take on it! I watched this a bunch on cable in the 80s, never thought of it then as the "bad Halloween movie" - it was scary and different, to me. Glad it is has won over its own legion of fans over the years. I am happy have many different roads in the Halloween woods.

Yeah, it's funny how this movie's rep has turned around over the years. For the longest time, it was almost universally reviled but slowly people came around to it. It just goes to show that time is the true test of a movie. A lot of movies that are popular and acclaimed become forgotten after a few years and movies that were absolute bombs can become beloved.