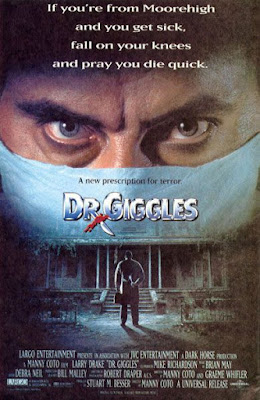 Much to the frustration of filmmakers and studios eager to find reliable cash cows, it’s no easy task to create a successful horror icon – one that can be endlessly exploited in sequels, reboots, and remakes.

It seems that the only way for it to happen is for it to happen by complete chance because whenever filmmakers deliberately set out to create the next Michael Myers or Freddy Krueger, the attempt typically falls flat. That’s even true even when the successful creator of an icon tries to catch lightning again – witness the failure of Wes Craven’s Shocker (1989), the movie that was supposed to make the mega-watt madman known as Horace Pinker into a household name.

Mitch Pileggi (The X-Files) played Pinker to the hilt in that film and the gimmick of a villain able to travel through any electrical device had potential but audiences didn’t show any appetite for Shocker, much less for a Shocker 2.

Likewise, Max Jenke of The Horror Show (1989) proved to be a one-and-done slasher villain as did The Trickster from Brainscan (1993) and, well, the list goes on. For some inexplicable reason, I’ve always indulged a high level of fondness towards failed fright franchises and so I’d like to celebrate the twentieth (!) anniversary of one of my favorite second rate fear figures: the maniacal master of medicine and mirth (and girth!) known as Dr. Giggles.

With a fear of doctors (or at least a palpable sense of anxiety concerning them) being so commonly found in so many people, you’d think that a horror franchise centered on an insane doctor would be a guaranteed hit but it didn’t go that way for Dr. Giggles when it was released by Universal in October of 1992, just in time for Halloween, and quickly succumbed to a fatal case of audience indifference.

It’s become standard practice among horror fans to regard the slasher films of the ’80s – no matter how sub-par they might be – as horror classics while their ’90s counterparts still aren’t granted the same amount of affectionate leeway (even Scream remains out of favor with many hardcore fans). But that won’t deter me from giving some critical care to the reputation of Dr. Giggles.

Directed by Manny Coto (who, in recent years, has worked as writer and executive producer on both 24 and Dexter), Dr. Giggles remains a grisly and good humored slasher effort, bolstered by its major studio production values.

The script (by Coto and Graeme Whifler) follows the standard slasher movie template – a long-institutionalized lunatic escapes from the asylum only to make a beeline back to his hometown to stalk unsuspecting teens – but compensates for its assortment of clichéd beats with grotesquely funny kills (ingeniously executed by KNB) that display a comic book sense of exaggeration (the film was in fact adapted as a four-issue miniseries from Dark Horse Comics tied to the movie’s release) as Dr. Giggles occasionally employs oversized props (like a giant band aid, for instance) to dispatch his victims and actor Larry Drake’s portrayal of Dr. Evan Randall Jr., aka Dr. Giggles, is purposely larger than life.

As Dr. Giggles uses every instrument in his medical bag on the soon-to-be-ailing population of Moorehigh as he tries to carry on the twisted legacy of his disgraced (and deceased) physician father, Coto shows an appropriately sick sense of invention in exploiting his medical motif. Nothing is left on the (operating) table as every possible pun and one-liner related to any well-worn medical cliché makes its way into the film.

The corniness of such an approach might be off-putting to some but I love that Drake delivers every groaner in the script (and there’s a lot) with equal enthusiasm, right up to the last gasp where he breaks the fourth wall to deliver his parting quip directly to the audience (“Is there a…doctor in the house?”).

Coto and co. are so thorough in squeezing out every last potential joke and creative kill from their concept that had a Dr. Giggles 2 ever happened, I don’t know if there would’ve been anything left to deliver as I think they pretty much exhausted the character in one shot.

Giggles’ gaggle of victims – including future Charmed star Holly Marie Combs, the late Glenn Quinn (best known for his role in TV’s Rosanne), and ’90s personality Doug E. Doug – represent the standard character types that find their way into every teen slasher. They all seemed pretty tiresome and unexceptional back in 1992 but twenty years can lend an endearing aura of nostalgia to even the most vacuous teens.

Looking at the movie now, it’s clear that Combs made for a more than adequate scream queen in her turn here but this film wasn’t about the kids, it was all about launching Dr. Giggles as the next horror superstar.

That didn’t pan out so well but with horror films you can’t always go by the snap judgment of audiences. Appropriately for the horror genre, just because a movie might look dead on arrival doesn’t mean that it’s going to stay dead. Some films just take awhile to be discovered or appreciated.

At the time of its release, Dr. Giggles appeared to serious horror fans as being nothing less than a dose of pure poison. Today, it looks considerably less toxic. It may not balance its mix of horror and humor with surgical skill, exactly (it’s no Abominable Dr. Phibes), but it plays like a welcome antidote to the overt grimness that has often pervaded the genre in recent years.

It’s an old cliché (that doesn’t go unmentioned in this film, naturally!) that laughter is the best medicine and, as it turns out, there may be more than a bit of truth to that as, twenty years on, Dr. Giggles is looking healthier than ever.