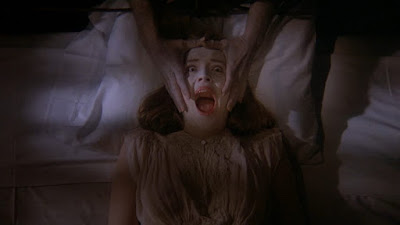 I don't recall ever seeing the trailer to 1981's Deadly Blessing prior to its release. It just never played in front of any movies I saw at the time. But I can tell you this, I sure as shit saw all the TV spots for it.

One damned commercial in particular always seemed to know when I was alone in the house and it would ambush me every time and every time I was convinced this movie was far too evil for me to deal with.

Someone had gone and made a movie that was the devil personified.

Well, maybe you can't see it but when I was twelve, I sure saw it!

I saw it and I couldn't unsee it. Pure evil burned into film.

Oddly enough, the actual theatrical trailer - you know, the one that typically screened before grown adults who were ready to handle it - isn't nearly as ominous as that TV spot that any innocent pair of eyes could be exposed to.

For comparison's sake, here's the trailer:

Ok, pretty scary. But the TV spot is so much worse!

I didn't even have to watch the commercial to be scared by it. And believe me, many times I didn't watch it because I would run out of the room when it came on. But could hear it! That evil background music playing under the equally evil narration was enough to have me shaking.

"More chilling than nightmares. Blacker than the darkest corners of your mind. There is the unholiest terror of all. Deadly Blessing. Rated R."

The fact that it ended with "Rated R" is really what sealed the deal for me. That was back when I was genuinely intimidated by R-rated movies (what can I say, I was a very fragile young person). Some R-rated movies didn't automatically cause me to cower in fear at the mere thought of them but Deadly Blessing sure did. It seemed to be operating on a whole other level than, say Friday the 13th Part 2.

I think the main thing that threw me about Deadly Blessing is that, unlike most horror movies at the time, it wasn't a slasher movie. I couldn't immediately wrap my mind around what it was even about.

When I would see a commercial or a trailer for a slasher movie, I instantly got what it was. Someone in a mask and carrying a knife or an axe was chasing someone. And that's pretty scary, sure, but I can comprehend what I'm being scared of. I didn't have that luxury with Deadly Blessing. The fact that the commercial was so vague as to what was going on made it so much worse. I just got the impression of an unseen evil force stalking people and I couldn't handle it, man!

Another year or so down the road, though, and the spell that horror movies could cast on me was broken. I became old enough to still be excited for them, to still expect to be scared at times but they were now...just movies, you know? But in 1981, I was still young enough and naive enough to feel like a movie could be more than a movie, that it could be something crafted in a dark place by wicked hands, capable of taking you somewhere you didn't want to go.

I kind of miss that feeling. We all get jaded eventually, it's just the natural course of things. You can't say wide-eyed forever. But that brief time in your life when you were, that's a blessing to remember. 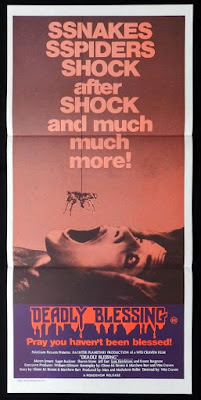