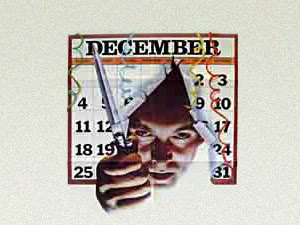 Before the release of One Missed Call officially gets 2008 off on a shit note, I thought it'd be worth listing some the movies I'm most excited to see this year.
Excluding titles that have already been reviewed in advance elsewhere like All The Boys Love Mandy Lane, Diary of the Dead, Trick 'R' Treat, Rogue, Mother of Tears, REC, Inside and Stuck, here's fifteen films due in '08 that I've optimistically earmarked for excellence.

1. The Ruins
The book by Scott Smith was great but didn't seem like something that begged to be brought to the screen. If anything, while it was a simple story - vacationing kids stumble on ancient ruins and the man-eating plant life that lives there - it seemed like a lot could go wrong if you actually had to make a movie out of it. But with Smith adapting his own work (as he did with A Simple Plan) and the early teaser looking promisingly creepy, I'm hoping the vicious vines of Smith's book will be 2008's most memorable monster.
2. Drag Me To Hell
Sam Raimi's return to hardcore horror. 'Nuff said! And really, even if this were PG-13 I'd be very ok with that. I'm sure he's going to make a fun movie and I can't believe that he wouldn't go all out to make his first non-Spider-Man movie since 2001 (!) a special event. And regardless of the film itself, I just want to see the title Drag Me To Hell on a theater marquee.
3. The Happening
A lot of people might be off the M. Night Shyamalan train after The Village and Lady in the Water but I'm still interested in anything he does. If nothing else, I think the blow dealt to him with Lady in the Water might've fueled his ambition to get back in the good graces of the movie going public. I also hope it inspired him to go for the jugular in a way he hasn't before.
4. Midnight Meat Train
It's been too long since I read the short story to have any feelings on what does or doesn't need to make it to the screen here to do this right (I should probably try and find my old dog-earred copy of Books of Blood) - I just hope this is a scary, stylish flick. I'd hate to have a great title like "Midnight Meat Train" go to waste on anything less.
5. Splice
Cube director Vincenzo Natali teamed with producer Guillermo del Toro with Adrian Brody and Sarah Polley starring in a tale of genetic tampering gone haywire sounds like it can't help but be great.
6. Heart-Shaped Box
I haven't read Joe King's novel about a haunted rock star yet but I've heard enough good things to be intrigued by an adaptation. And the fact that Neil Jordon is directing makes me think that it'll be worthwhile.
7. Quarantined
I haven't seen REC yet (the source material that this remake is based on) or The Poughkeepsie Tapes - which is the previous film by director John Erick Dowdle - but the scary scenario of an apartment building hit by a rabies epidemic sounds like it could be a winner. Also, I think actress Jennifer Carpenter (The Exorcism of Emily Rose) is great so putting her in the lead here is all right with me.
8. The Strangers
The fact that this was pushed back from last year (and doesn't have a date in '08 yet) doesn't say good things about this home invasion chiller but I love the fact that the poster looks like it's a lost one-sheet of late '70s/early '80s vintage. And the trailer suggests that the movie will have what it takes to back up that vibe.
9. The Box
I never read the short story or even saw the adapation that was done for the '80s version of The Twilight Zone but I'm hoping that Richard Kelly helming this Richard Matheson adpatation will result in a smart, scary film.
10. Mirrors
I keep hoping to eventually love a film by director Alexandre Aja. I thought both High Tension and his Hills Have Eyes remake were almost good pictures that ultimately left me disappointed. But this supernatural tale of a department store security guard (played by Kiefer Sutherland) who has to contend with creepy reflections in store mirrors sounds like it could offer eerie fun.
11. Scanners
The Saw guy following in the footsteps of David Cronenberg throws any hope of a great movie out the window immeidately. And no Michael Ironside just means that none of this shit matters. But that makes it easier to just sit back and watch heads explode.
12. Dracula Year Zero
I'm soft on the idea of another Dracula movie but I'll give this one a shot in the hopes that director Alex Proyas will be making a film more along the lines of The Crow and Dark City rather than I, Robot.
13. Pig Hunt
Sure, director James Isaac hasn't done anything worth getting excited about to date. We've got The Horror Show (still arguably his finest hour, for what it's worth), Jason X (which should've been a lot more fun than it was) and Skinwalkers (which I'll just assume is atrocious) so why get excited about another film from the man? Two words: Pig Hunt.

Come on, how could a film called Pig Hunt not be good?

14. Hellraiser
I'm usually pretty even tempered on the subject of remakes. What difference does it make to me whether they're good or bad - I'll still love the originals regardless. But just for sentiment's sake I really would love this remake to live up to the taboo-smashing legacy of the original. I haven't seen Inside yet but if it's as good as everyone says, I hope Alexandre Bustillo and Julien Maury make this follow-up every bit as hardcore.

15. The X-Files 2
It'll probably bite me on the ass to get excited about this but I know as soon as I hear Mark Snow's X-Files theme in the first teaser trailer, I'm going to go nuts. No matter how frustrating the last few years of this show sometimes were, The X-Files is still my favorite genre show ever. Chris Carter may have made some exasperating, ass-brained storytelling decisions during his show's nine year run but when The X-Files worked, it resulted in the some of the scariest hours ever seen on TV. I'm just hoping reports that this sequel will steer clear of the series' mythology are true.


Ok, that's my list. Pig Hunt is on it. And I'm happy about that. I'm also happy that among my picks, original films out-number sequels and remakes. Here's to 2008!