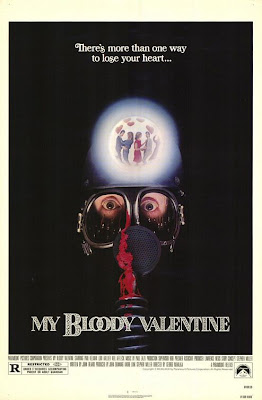 Given the affection I still have towards the early '80s slasher films I grew up on, it's a little dispiriting to see favorites like Prom Night now being remade and aimed at a generation too young to have even seen Scream and I Know What You Did Last Summer in the theaters but for me the upcoming My Bloody Valentine remake is the real heart-breaker.
I vividly recall the TV spots for My Bloody Valentine terrifying me back in the early months of 1981. I was a latchkey kid, alone in the house after school until my working parents came home around 6 o'clock each night. And in the weeks leading up to My Bloody Valentine's Febuary release, it never failed that at some point after it got dark but before anyone else was home, a commercial for My Bloody Valentine would come on with its shots of a pick-axe wielding killer stalking through tunnels in his miner gear. This was before the days of remote control (at least it was in our household) so to change the channel, I'd have to actually approach the TV, which I couldn't bring myself to do as long as the commercial was playing. My alternate solution to that was to simply scurry out of the room. These spots were likely only 30 seconds long but to this scared shitless kid they seemed to last a tortured eternity.

When I eventually saw MBV a few years later on HBO, I really dug it. Sure, it wasn't quite as nerve-frying as its commercials had me expecting but it was a solid effort, comparing well to the other modern horror movies I'd seen up to that point. And as I've revisited it over the years, I've found it to have a much healthier shelf life than almost all of its slasher contemporaries.

What I continue to enjoy about MBV is that director George Mihalka and his cast made a real effort to bring a sense of realism to their film's blue collar community. The mining town of Valentine Bluff ("the little town with the big heart") is a convincingly dead-end piece of Nowhere and even the most attractive cast members here don't look too Hollywood (which would be strange if they did, seeing as this was a Canadian production - but you get my meaning).

Scripter John Beaird has been quoted as saying that MBV was striving to be the "Deer Hunter of horror films" in that, like Deer Hunter's steel worker protagonists, this was also about close-knit, working class characters. Most slasher films of the time featured protagonists on the cusp of promising futures - either high schoolers as in Halloween, Graduation Day, and Prom Night or college students as in House on Sorority Row, Hell Night, and The Dorm That Dripped Blood (even Terror Train centered around the final good times of a graduating college class) - but MBV was different. It was about kids (twentysomethings, actually - another break with the slasher norm) with no futures to look forward to. For these characters to live their adult lives in Valentine Bluff meant working in the local coal mine with no prospects of breaking the cycle of their parents (the one character who does try to get out - Paul Kelman's 'Jessie' - fails to make it on his own and has to return home shamefaced to work in the mines). And that focus on these working class heroes continues to mark MBV as being a different type of slasher movie.
I don't know what direction the remake's script will take but I'm anticipating that they'll entirely abaondon the original's mining town setting and if that's the case, then it isn't My Bloody Valentine in my eyes. It was unique at the time of the original's release to see a horror film take place in a community like this and it's even rarer now. In fact, it's become almost impossible to see blue collar characters in any form of entertainment any more. TV used to be filled with ordinary people who lived paycheck to paycheck but now for a character to be the center of a TV show means that they must be either a lawyer, a doctor, a cop, a CSI invesigator, or a TV writer. The days of people working as mechanics, bar tenders, taxi drivers or waitresses are extinct (with the notable exception of The Office, virtually the only time you see everyday people on TV now is when they're grasping for their fifteen minutes of fame on reality shows). And movies aren't any better in this regard. I mean, I know movies are all about escapism but in recent years, it seems like there's been a new-found aversion towards characters who live within modest means. Even middle class characters are being pushed aside - for example, it's just been reported that the family in the remake of Last House on the Left are now due to be vacationing at their lakeshore home!
Although current trends aren't in its favor, I hope that the new My Bloody Valentine won't abandon its blue collar roots in favor of flashier folk. If the only place I can see regular people is in a slasher movie, then so be it.
Posted by Jeff Allard at 9:48 PM