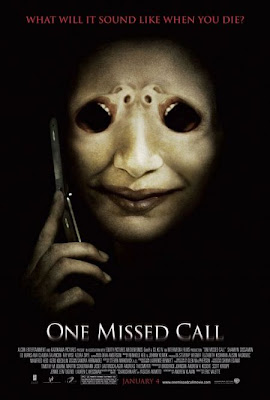 This latest, and very late to the party, entry in the J-Horror remake sub-genre is evidence that this well has dried up creatively and commercially. The 2004 original by Takashi Miike was no great shakes - an usually mainstream venture by Miike - but at least it didn't make me want to punch anyone in the face. This remake from director Eric Valette on the other hand made me glad that one rarely has the opportunity to watch a movie in the company of anyone able to take the blame for what you just watched (on the other hand, that might actually prompt filmmakers to make better movies).
The storyline here is the usual brand of supernatural hot air - a group of friends (which includes Shannyn Sossamonfind as psychology student Beth Raymond) find that they're being called by themselves (!) from a date several days in the future (!!) and the snippets of what they hear are their own last moments on Earth (!!!). Before each doomed character dies, they see weird visions of characters sporting surreal features such as mouths for eyes and so on. I'm all for that and for a brief while I was optimistic that this would be a totally pedestrian but not unwatchable movie (when you're talking about the first horror release of the year, which is historically awful, you've got to have adjusted expectations) but then it's as though the movie realizes it's supposed to be shit ("Hey, aren't we coming out in January?") and starts to act accordingly.
The main problem here - as it often is with supernatural stories - is in the explanation or backstory for the haunting at the heart of this movie. Sadly we live in a time where writers are directors are convinced to the bottom of their souls that explanations are the earmark of good writing. The more that they've explained, the more on-the-nose they can be, the more modern filmmakers think that they've their job. So a movie like this can't use the one thing that might make it compelling - ambiguity. That means even the creepy little ghouls that rear their heads here have to be explained. But how do you even begin to explain a figure with mouths for eyes? Oh, wait - let's discover that all these weird figures originally existed as toys in a child's bedroom! Yeah, that makes SO much sense!
I imagine that if The Exorcist were made today, some asshole involved in the production would probably insist that they find a way to work in an explanation for the briefly-glimpsed, white-faced "Captain Howdy" image that subliminally flashes on the screen at key moments. And I'm sure they would be totally convinced that doing so would be a sign of the creative ingenuity they were bringing to the production (I can hear the oblivious pride in the voice of the makers of an Exorcist remake right now - "in the original they never explained who that face belonged to - they just put it in there for no reason. But here we really get into who Captain Howdy is!"). And so it goes with One Missed Call.
But while Klavan and Valette take so many pains to offer explanations for their film's surreal images, they ironically don't give too many reasons for their ghost's actions. That normally wouldn't bother me but as the story develops it seems like we really should know a little bit more than the film is telling us. By the end of the film, there's not just an evil ghost but a good ghost as well and I think it could've been laid in better as to why the good ghost never did much to help anyone besides the main character. It's also unclear as to whether the conflict between these warring spirits is resolved or not. And not in an intriguing, gotta-think-about-that-ending kind of way but in a "looks like they just decided to insult us" way.
Sometimes I get the feeling that filmmakers think that any ending is suitable for a horror film, as long as it's bizarre and open-ended. They'll explain every other thing along the way but they don't think that the story they're telling needs a proper ending. That's probably because they're not really sure where their film is going in the first place.
Maybe it would've helped if Valette and Klavan could've gotten a call from the future before starting to work on this - although given how their film turned out, I think all they would've heard was dead air.
Posted by Jeff Allard at 4:26 AM

Email ThisBlogThis!Share to TwitterShare to FacebookShare to Pinterest
Labels: One Missed Call