If You're A Ninja And You Know It, Clap Your Hands 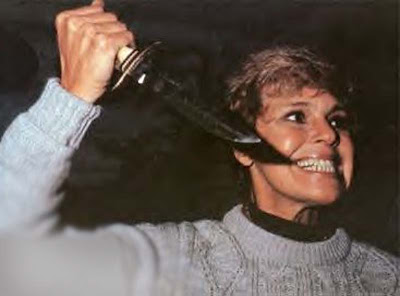 As Crazy Ralph would tell you, Camp Crystal Lake is cursed ground. For decades after the accidental drowning of her son, former camp cook Pamela Voorhees made it her mission to avenge Jason’s death and keep future generations off that Hell-marked property. After putting her unsightly man-hands to work on committing a pair of murders, setting a mysterious fire, and poisoning the camp’s water supply, it looked like the camp’s reputation was permanently fried and Mrs. Voorhees’ work in Jason’s name was done.
However, in 1980 when stubborn dreamer Steve Christie decided that Camp Crystal Lake deserved another chance to succeed and he hired a staff of young counselors to make it happen, Mrs. Voorhees had to redouble her efforts. That meant that acts of minor vandalism were yesterday’s tactics. Property damage wasn’t going to cut it anymore. No more half-measures – it was time to unleash the beast and kill every single person on the camp grounds (instead of “They Are Doomed”, the poster for the first Friday could’ve read: “They Fucking Asked For It!”).
But when Mrs. Voorhees’ jihad against the horny teens of Camp Crystal Lake was cut short – along with her head – and Jason himself was left to pick up the bloody baton from his mother, fans immediately started asking questions. Had Jason been alive the whole time and been living in the woods? Was he a zombie? Why couldn’t he be killed? Why did he bother putting a door on the filthy bathroom in his shack in Part 2 – was he expecting company, like ever? Why does someone who was born to shit in the woods even have a toilet in the first place? And does anyone know why his face looks completely different in every movie? And while those questions have persisted in fan circles over the years, no one ever seems to ask the real question: What the Hell was Mrs. Voorhees supposed to be?
When the original Friday the 13th was released, it was regarded as a pretty straight-forward tale. This unbalanced mother had suffered a terrible loss and no body count would be too high to atone for it. Yeah, the death of Jason was her motivation – that’s understood. The major contributing factors in that death, such as premarital sex and recreational drug use – those were grounds for execution. Yep, gotcha. But I want to know – how the hell did this middle-aged woman physically accomplish the acts she committed in Friday the 13th? I mean, seriously – how? With few exceptions, these are not the kills that most women her age could pull off. These aren’t even the kind of kills most robots from the future could pull off, frankly. What Mrs. Voorhees does in Friday the 13th is way outside the strength league of someone of her size, stature, and planet of origin.
Think about it: what woman could thrust an arrow through the bottom of a mattress, completely penetrate that mattress, and then drive the arrow even further all the way through the neck of someone lying atop the mattress? None, really – unless Ivan Drago underwent a sex change. And that’s not all. Somehow Mrs. Voorhees was also able to single-handedly raise an average-size dude – not a midget, mind you, a real guy – off the ground, hold his body against a wooden door and impale him against that door with arrows that she penetrated straight through this grown man’s body and into the door behind him with enough force to keep the body nailed against it. And she did all that shit in record time, too!
Mrs. Voorhees also hurled another chick’s dead body through a window and managed to place Steve Christie’s body up a tree. Come on – does any of this sound normal to you? After watching the original Friday the 13th more times than I can remember, and trying to make sense of what I was watching, I realize now that there’s only one possible answer:
Mrs. Voorhees was some kind of ninja bitch.
There’s no other explanation. If she isn’t supposed to be a ninja, then the movie is total bullshit. And no movie I’ve spent so much time watching could be that bullshit.
And apparently she wasn’t the only ninja bitch at Camp Crystal Lake that night. Mrs. Voorhees should’ve picked her prey a lot more carefully because even though Alice looks like the average girl next door, the average girl next door can’t decapitate a human being with a single swing of a machete, can they? No, not even if they use two hands. I mean, really – it took Conan at least two or three whacks with a sword to take Thulsa Doom’s head off at the end of Conan the Barbarian but in Friday the 13th, Alice separates Mrs. Voorhees’ head from those burly shoulders with one swing as cleanly as a lawnmower slices off the head of a daisy. And that says ninja to me.
I feel serene now that Friday the 13th makes sense to me. I just can’t believe it took me so long to put it together. But I probably shouldn’t be so hard on myself. After all, if ninjas were that easy to spot, they wouldn’t be ninjas.
And for anyone who might have cause to wonder – no, ninjas don’t usually resort to acts of biting and hair-pulling. But there’s nothing that says two warriors have never tried to settle their shit street-style.
Posted by Jeff Allard at 6:37 AM

Email ThisBlogThis!Share to TwitterShare to FacebookShare to Pinterest
Labels: Friday the 13th, Ninjas