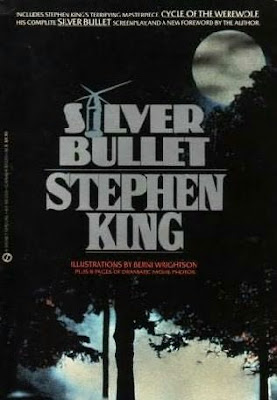 In the mid-'80s, it seemed like producer Dino De Laurentiis was on a mission to make Stephen King's work look as bad on screen as possible. Save for the sole quality effort of The Dead Zone (we'll assign the credit for that to the talented team of director David Cronenberg, producer Debra Hill, and screenwriter Jeffrey Boam), De Laurentiis and King made for a toxic combination. It seemed like every six months, De Laurentiis would have his name on another King disaster but in reality there were only three films - Cat's Eye, Silver Bullet, and Maximum Overdrive. But as these three efforts all appeared over the course of just two years ('85-'86), the impression was that De Laurentiis-produced King adaptations were everywhere and that these films were single-handedly putting '80s horror into a slump.
But there's always a silver lining to bad times and fittingly, the werewolf opus Silver Bullet (adapted by King himself from his Berni Wrightson-illustrated novella Cycle of the Werewolf) has attracted a cult following that views it fondly. And although I never would've thought so after I first saw the film back in '85 and had little good to say about it, the Silver Bullet cult includes me as a member, too. It's still a mediocre film, to be sure. But it scores points by being one of the more warmly felt horror films of its day without its emotions ever becoming cloying.
The cast is appealing (even though many of the side characters suffer from King's impulse to make the majority of his small town people cartoonishly crass), with Corey Haim's wheelchair-bound hero Marty Coslaw making for a sympathetic lead and his chemistry with his resentful but still-loving sister Jane (Megan Follows) and drunken but devoted Uncle Red (Gary Busey) never seeming forced. I also admire actress Robin Groves' performance in the role of Marty and Jane's mom, Nan (Groves' other genre credit is as the lead in 1981's haunted brothel movie, The Nesting). They all come across as real people and the presence of character actors such as Terry O'Quinn, Lawrence Tierney and Everett McGill further lend a convincing authenticity to Silver Bullet's onscreen community.
The scares are soft, the werewolf effects are a complete joke (creator of the film's werewolf suit, veteran effects man Carlo Rambaldi, left the industry altogether shortly after Silver Bullet), and the film's mystery as to which one of Tarker's Mill's residents is secretly a werewolf is so thin that King's screenplay doesn't even bother to provide any red herrings to avert suspicion. But there's something about the nostalgic vibe of this coming of age story that makes Silver Bullet an easy film to return to. In director Daniel Attias' hands, Silver Bullet is a briskly told tale that yet somehow doesn't seem to be in any hurry. Maybe it's the fact that horror films usually hurtle through their narratives in the space of a single breathless evening whereas the events of Silver Bullet extend over many months that this film is able to convey the sense that we all live with fear every day; that horror is rarely just an isolated intrusion but instead ebbs and flows like the cycles of the moon, victimizing our communities, striking close to our homes - and yet our day to day lives continue on.
Whatever the case, Silver Bullet is a movie that really hasn't gotten any better with age but yet its faults seem much less important than they did to me at the time - just like all the things that disappointed us so bitterly when we were young.
My thanks to the fine folks at Kindertrauma for inspiring this blog. Please visit them post-haste for a slew of Silver memories!
Posted by Jeff Allard at 4:40 AM