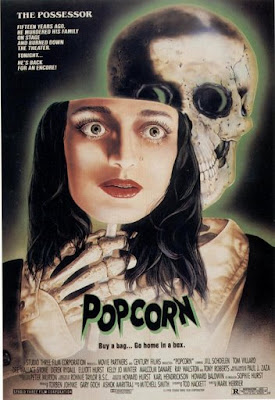 Part Mystery Science Theater, part Rocky Horror Picture Show, and part A Nightmare on Elm Street, the uneven but fondly remembered Popcorn (1991) cynically chased after the fading slasher successes of the '80s, but offered a sincere celebration of the monster movies of the '50s - and the promotional gimmickry that was often used to sell them (in that regard, director Joe Dante would tread similar territory in 1993 with his affectionate William Castle homage, Matinee).
As Popcorn opens, a young film student named Maggie (played by Jill Scholen, the underrated scream queen of The Stepfather and Phantom of the Opera) is haunted by strange, reoccurring dreams filled with disjointed images. Baffled as to the source of these dreams, Maggie intends to incorporate this vivid, subconscious imagery as part of her student film project but when the University's film department suddenly finds its funding cut, their professor (Amityville 3-D's Tony Roberts) offers Maggie and her classmates a chance to raise some money on their own by hosting a marathon of '50s horror movies - all with their vintage promotional gimmicks - at the local Dreamland Theater, a building soon scheduled for demolition. In this appropriately named "Dreamland", Maggie's waking world and her fragmented dreams will be fused into one.
While readying the theater for paying customers, the students come across a film made by cult guru Lanyard Gates who murdered his followers at the Dreamland years earlier in a deranged attempt at 'art' only to perish himself during the fiery incident (reminiscent of Richard Lynch's cult leader from 1988's Bad Dreams, who also fried his followers). Gates' film is called "The Possessor" and Maggie is overwhelmed to see that it corresponds to images from her own fevered dreams. Days later as the film festival swings into motion, Maggie notices a mysterious figure stalking the Dreamland among the garishly costumed crowds - and believes that this is Lanyard Gates, still alive. No one believes her, of course, but behind the scenes this same figure is stalking and killing Maggie's fellow students one by one with Maggie left to wonder why she's the final target of a madman's revenge.
Anticipating Scream (1996) by several years, Popcorn has the same sort of narrative self-reflections that Craven's film was celebrated for (in one layered moment, Lanyard Gates beckons viewers to "Come into my head!", from the psychedelic frames of "The Possessor" as Maggie watches the film within the very theater that she herself has spent so much time dreaming about), and the film gets good mileage from its story elements of reel vs. real. Although one wishes that director Mark Herrier had been able to bring some De Palma-esque flair to the script's well-conceived set-pieces.
Marking the first time since Black Christmas (1974) that Bob Clark and Alan Ormsby collaborated on a horror project, the two ultimately took their names off the credits - with Ormsby's writing credit going to the pseudonym Tod Hackett (and Herrier replacing Ormsby as director - this was to be Ormsby's first solo directing gig) and Clark's associate producer duties going uncredited (the 'Bob Clark' responsible for Popcorn's make-up FX is unrelated). Why both men decided to distance themselves from the finished film is unknown but Popcorn still bears the duo's creative stamp.
The films-within-the-film are Popcorn's real highlight, made with an exacting eye (and ear) to the conventions of the genre. The big bug film Mosquito recalls the atomic age likes of Them! and Tarantula; The Attack of the Amazing Electrified Man (starring familiar character actor Bruce Glover) echoes films like The Indestructible Man in which men are transformed by science into rampaging monsters; and finally the Japanese monster movie The Stench, filmed in "Aroma-Rama", gets the shortest amount of screen time with no memorable clips to its credit - its humor is strictly limited to playing up the infamous bad dubbing of Japanese imports.
The gimmicks for Mosquito and Electrified Man are both out of the William Castle play book with a giant prop mosquito flown on wires over the audience during the climax of Mosquito and Tingler-esque electric shocks delivered to wired theater seats during the climax to Electrified Man. Ormsby's script turns these prankish gimmicks into lethal weapons to good effect. The giant mosquito is hi-jacked by the killer, for example, and turned into a deadly missile - spearing a hapless off-stage victim through the heart as the unknowing audience is still cheering the prop's cheesy appearance. Moments like this raise Popcorn above standard B-fare, revealing a fleeting inventiveness.
The overriding slasher storyline and the mystery concerning the killer's identity isn't much, however (even though it brings its own group of cinematic references to the table - with visual and thematic cues to Phantom of the Opera, House of Wax, and The Abominable Dr. Phibes) so as the larger plotline moves more and more to the foreground, Popcorn becomes a lot less fun. Towards the end we get the inevitable moment where the revealed killer rants to a captive Jill Scholen and the movie never quite recovers. It doesn't help at all that Maggie's lunkheaded boyfriend is called on to make a bumbling rescue attempt at the climax, swinging clumsily over the Dreamland's audience on his way to the theater stage with exaggerated cries of "Whoa! Whoooa!". It's not enough to completely undo the good vibe of the film but it might make you wonder: where's a lethal prop mosquito when you really need one?
The irony of Popcorn is that for a movie whose plot was so indebted to the lost art of selling cheesy exploitation films, its own marketing was so poorly handled.
Lackluster ads for Popcorn that referenced Halloween, A Nightmare on Elm Street and Friday the 13th and promoted "The Possessor" as predating them all were just confusing and didn't hint at Popcorn's quirky appeal. Despite its celebration of crowd participation and of the shared joys of movie watching, Popcorn played to mostly empty theaters - only to later find its audience one-on-one on home video.
Posted by Jeff Allard at 11:06 PM

Email ThisBlogThis!Share to TwitterShare to FacebookShare to Pinterest
Labels: Popcorn

I seem to remember reading an interview with Clark in Psychotronic Video Magazine where he talked a little about the problems this movie had behind the scenes. I'll see if I can dig it up. As big a fan of Clark as I am, I've never seen this one.

Well, it's definitely worth a look. Because he left the production mid-way through, this isn't nearly as good as Clark's other films. But it's still fun and there's a hint of his and Ormsby's sensibilities left to enjoy.