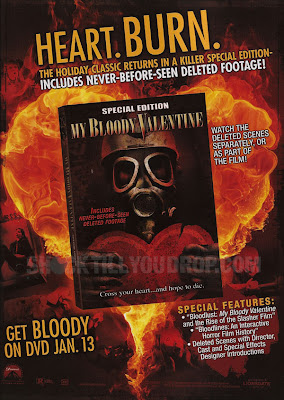 Seeing that the long lost cut scenes from the slasher favorite My Bloody Valentine (1981) are finally due to be reinstated into the film courtesy of a special edition DVD arriving next January (see the above ad, as posted by Shock Till You Drop) made me think about what a different experience it is for fans today to grow up in the era of DVD. This uncut edition of MBV is something that fans of my generation have been waiting to see for close to thirty years now, ever since reading in the pages of FANGORIA about the film's tragic truncating at the hands of the MPAA. Until this new disc was announced, I thought the most we'd ever see of MBV's deleted gore shots would be those few pics that made it into Fango at the time of MBV's original release. So to be able to lay eyes on this uncut version is a true event for legions of Gen-X gorehounds - and that's a kind of fanboy excitement that the younger fans of today will never know.
The way studios market their genre films on DVD now largely revolves around providing fans with the uncut versions of movies. Even for the lamest of PG-13 efforts an unrated DVD with scenes "too intense for theaters" is standard issue. Never mind that today's R-rated films already get away with so much more than the films of the '80s (I can't imagine how the MPAA of 1981 would've reacted to the likes of Hostel or Saw - or to The Passion of the Christ, for that matter) but no matter how graphic an R-rated film can be now, it's guaranteed that any bloodshed left behind will find its way to the DVD. Today's fans will never have to wonder what they're missing from the films they've been growing up with (well, not in terms of gore, at least). For them, there's no such thing as not being able to see all of Zack Synder's Dawn of the Dead remake or Eli Roth's true version of Cabin Fever. There aren't any 'lost' or incomplete films among the new wave of splatter pics. There's no legendary cut scenes that today's fans will have to wait decades to see, if ever. Call me nostalgic but I think there's something sad about that.
When the Friday the 13th remake is released next year, I'm guessing that it'll be a bloodier Friday to begin with than any of the previous entries in the series but on top of that, the DVD will include anything that may not have made the R-rated cut. That's a very different experience than what fans went through back in the day with the original Friday films. Imagine how it would've been to be able to see the infamous double impaling from Part 2 on home video just a few months after seeing the theatrical cut? Or the alternative ending to Friday the 13th 3-D where Dana Kimmel's character loses her head to Jason? But I have to wonder - would that have taken away some (if not all) of the mystique that we've attached to these otherwise ordinary films?
There's something about anticipation, about having something withheld, that fuels passion. My Bloody Valentine is certainly a solid movie but how much of the intense devotion that fans have for it is due to that missing material? Sometimes it's what you don't see or what you can't see that makes you a more avid fan. And never mind the question of cut footage, just having immediate access to a film can make a difference. For example, I doubt if I'd love The Boogens (1981) quite as much as I do if I had been able to own a copy for myself the same summer I saw it on HBO or The Movie Channel or where ever it was that I first watched it. It was less the film itself than it was the waiting over ten years to see it again that stoked my love for it. If it hadn't been out of reach for so long, I'd just regard it as a pedestrain monster movie and that would be that.
But when films fall between the cracks, when scenes are removed against a director's wishes - that's when interest is piqued; that's when legends are formed. And if sometimes the legend proves to outshine the actual film, that's ok. Real classics are few and far between. It's the irrational feelings we develop for a film that end up making the difference. Anything that can help a film seem larger than life is fair. Maybe that's why the films of today have such a hard time competing with the likes of My Bloody Valentine. It's not that today's films are so inferior - after all, there's a big streak of average to be found in MBV. But it just feels wrong not to love it.
Posted by Jeff Allard at 9:10 AM

I agree, horror films, especially, thrive on having 'lost' footage... or 'scenes so disturbing they had to be edited out...'
It adds an element of mystery that many of the films themselves were otherwise lacking.
It also gives fans a sense of ownership... involvement... to know that, somewhere, there really is film of the heroine being beheaded or of a certain offscreen murder happening onscreen. Now it's all on the DVD... easily accessed by even casual viewers.
Also, without the easy accessibility of DVD/video... the films were free to grow and mutate in our minds... we might think we remembered the details of a specific scene... but couldn't verify it by immediately watching it on DVD... with frame by frame advance and instant playback...
After watching some 'classics' recently I was surprised that scenes I thought I'd seen weren't there... probably edited in my mind to include still images I'd seen in horror magazines of the day.

(as an unrelated side note I'd like to complain about your use of Saw and Hostel as prime examples of how far the content of modern horror films have gone beyond those older ones... maybe you only used those because they are so mainstream... but still... that seems to be playing to their hype of how transgressive they are... which they aren't).

I definitely think the easier it's become to have access to any and all horror films and to know that nothing will be held back has taken some of the intrigue and adventure out of being a fan. As aggravating as it may have been, it did make a film special to have it be unavailable or incomplete.

As for my citing of Hostel and Saw, I agree that those are far from the transgressive films they're hyped as but I do think they're explicit enough to show how the MPAA generally lets more slip by now then they did in the '80s.

Can! Not! Wait! (And there aren't enough exclamation points that can properly convey my excitement.)