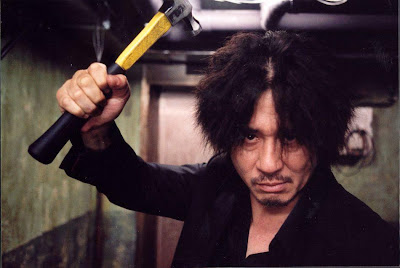 The news that the unlikely duo of Steven Spielberg and Will Smith are circling a remake of Chan Wook-park's 2003 film Oldboy has left the world of fandom choking on their own ire and indignation. I mean, aside from the fact that Oldboy should never have to suffer a US remake, if it does have to happen at least let someone who might get it right do it - like David Fincher, for instance. Match the right director with the material, for crying out loud. Judging by the online feedback, that's what most people think. But not me. Let me be the first to say that I'd love to see a Spielberg/Smith Oldboy. It may end up being terrible but I'd like to see it for myself.

Talks of an Oldboy remake have been in the air for awhile but this is the first time that I actually want to see it happen. Why am I for it now? Especially with these two involved? Because I think Spielberg and Smith might be looking to prove something with it. For years, with the likes of Schindler's List, Saving Private Ryan, A.I. and Munich, Spielberg has been trying to counter the perception of himself as a maker of feel-good entertainment. And perhaps feeling that he made an ill-advised backstep with Indiana Jones and the Kingdom of the Crystal Skull, Spielberg will be motivated to be even more daring with Oldboy.

And in regards to Smith, every time he's cast in anything vaguely serious the cries go out that he'll turn the role into an occasion for wisecracks and one-liners. But where this perception comes from, I'm not sure. The bottom line on Smith is that he's a great actor and he's had no problem stepping up to do the job in any film. Six Degrees of Separation, Ali, The Pursuit of Happyness - those aren't joke roles. And whether or not you liked I Am Legend, Smith's performance wasn't cribbing at all from his Independance Day/Men in Black persona.

None of this means that Spielberg and Smith will do Oldboy right but I feel that the capacity is there. I'd like to think that their mutual interest lies in a desire for a project that'll challenge themselves and people's perceptions of them. After all, this isn't an obvious fit, like Tim Burton taking on Alice in Wonderland. That's a film I already feel bored by before seeing a single frame. But whether or not Spielberg and Smith's take on Oldboy works, if nothing else I feel like it won't be run of the mill. There's a great potential to look like a fool in taking this on and I don't think anyone has sharp or as successful as Spielberg or Smith would risk looking ridiculous if they didn't think they had the goods. Or if they felt they couldn't help but come in looking second best.
That might be naive thinking on my part but what's the harm in hoping for success? If this movie does happen, with Spielberg and Smith collaborating, I'll be approaching it with boyish optimism.
Posted by Jeff Allard at 2:12 AM

For some reason I'm with you on this...
It might come out horribly... but somehow I bet it will still be interesting.

Yeah, we'll see. The whole project may just fade away or pass to other hands but the idea of Spielberg and Smith doing this is daffy enough to make it intriguing.

Jeff, your examples of Spielberg showing his skills at "serious" filmmaking are spot-on. But Will Smith...granted, I haven't seen I Am Legend, but I can't see him taking himself to the level of brutality and depravity the original Oldboy embraces. Or rather, I can't see myself buying him doing it.

Also, they'll need to age him a bit on the other side of the character's 15-year prison stay. That is, if we're to believe a certain other person is a certain age (trying to avoid spoilers here for the unitiated readers).

I agree that Smith is the bigger sticking point here. I have a hard time seeing him in the role, too, but I wouldn't bet against him pulling it off.