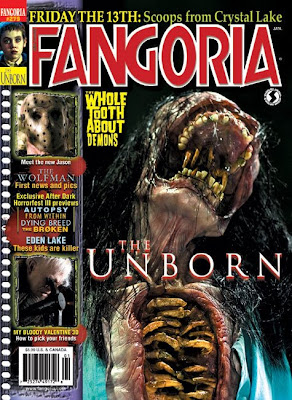 At some point it may come to pass that FANGORIA's editorial staff will adopt a discerning, wait-and-see attitude before giving an unknown quantity like The Unborn their big cover shot (by the way, doesn't that whatever-it-is look like the Zuni Fetish Doll from Trilogy of Terror reborn as a creation from Carpenter's The Thing?). After all, it can't always feel great to be caught lavishing attention on the likes of Cry Wolf or Dreamcatcher but I'm grateful that they do.

I like the fact that Fango can always be counted on to pimp whatever genre film is around the corner no matter how promising or unpromising it might look (I also like the fact that even classy films can be rendered cheesy by a Fango cover, like Videodrome being accompanied by the cover blurb "TV With Guts!"). You'll never catch Rue Morgue with egg on its face from covering the likes of, say, Mirrors but I think I'd respect them a lot more if they did. I always get the feeling that the people at RM are pleased with themselves for putting out such a classy product, that they're raising the bar for genre mags or whatever. And while that may be an accomplishment to be proud of, I have more affinity for Fango. I've always liked that the tacky and the timeless have an equal chance of being on Fango's cover.

One month it could be Maximum Overdrive or Resident Evil: Extinction and the next it could be The Shining or Pan's Labyrinth. That feels right to me and more accurate to what it is to be a lifelong horror fan in that part of being a fan is getting stuck watching your share of duds. Yet often times those duds - and the occasional spectacular failure - can represent some of your fondest movie-going memories more than most classics. When you're a horror fan, shitty, disposable films (I'm looking at you, Leviathan!) can mean as much to you as the exceptional ones. And not just old shitty movies that've had a few decades to gain their following but the new ones, too. Whether it's good or bad, The Unborn has just as much chance of being important to some horror fan as Let The Right One In does.

And even if what ends up on Fango's cover is a commercial appeasement to one studio or another rather than a matter of personal taste, that's ok. After all, the people at Fango need to pay their bills and put food on the table the same as every other working chump. The real world is always pounding on the door - that's why we need that shared outlet of horror to escape to.
Posted by Jeff Allard at 4:43 AM

I love this post. You bring up so many good points. And good call on the Zuni comment! I think that clinched me wanting to see this movie (and also get this issue of Fango!).

For whatever reason, reading this post made me kind of sadly nostalgic. I mean that as a good thing. How often do you read something and feel nothing?

Thanks for the kind words, Amanda! I wasn't sure how this post would be received - I'm glad to know you liked it!

I agree with pretty much everything you've said. Although I admit to being a bigger RM fan, I think you really made a nice argument for Fango and you've piqued my interest in picking up some newer issues.

You've made a sale! If only you got commission! :)

cGreat post. I can't imagine how many times Fango led me astray but I would not trade a minute of it. I think true horror fans are especially adapt at digging through the trash to find those pearls and really it's part of the fun. I never understood how angry people get when disappointed by a movie. In most cases somebody really TRIED to do something good. So they failed, big deal. It's not as easy as it looks! This post reminds me of the simple joy of searching for that special movie. In the days before the internet, before you had access to a million people's opinions, thats what you HAD to do. Sometimes I really miss it!
As great as it is to find almost everything is available I'll never forget the feeling of my heart pounding out of my chest when I came across some video store closing sale and seeing all of those titles I knew nothing about and taking that gamble, knowing I might loose and not caring. By the way, I have to admit some of those early Fango inspired disappointments became favorites of mine later in life!-unk

Yeah, there's lots of movies I've been burned by that have ended up being cherished favorites. There's something about the clarion call of crap that's hard to resist, I guess. I've never begrudged Fango for getting me excited about a movie that turned out to be lousy, though - if you resent watching bad movies, you shouldn't be a horror fan in the first place. As they say, one person's trash is another's treasure.

I do miss the pre-internet days when there wasn't an immediate consensus on movies weeks or even months before a movie was released. It was great to read about a movie in Fango and feel as though C.H.U.D. or Trick or Treat had every chance of being as good as A Company of Wolves or A Nightmare on Elm Street.

What used to drive me nuts was when a movie would make the pages of Fango but then promptly disappear into oblivion. Director John "Bud" Carlos's Mutant was one that I couldn't wait to check out at the time but I still haven't seen it to this day. Neon Maniacs was another that I was sure was going to be the next horror classic and Future-Kill, too. I was always confused when I read about a movie that looked so cool to me but then it didn't play in any theaters.

I probably should've figured out that they just weren't good enough to get a theatrical release but the pictures in Fango always looked too promising to believe that!

Just stumbled on this...great post and - talking from someone who has done time with both mags and is a LIFELONG horror fan - horror is subjective. That's what I love about it...some mags don't get that. Horror is all about the quest and I personally don;t like it when genre periodicals attempt to TELL you that they know MORE about film than you do...

Thanks, Chris! I generally like what RM does and respect the quality of their writing but as I said in the blog, there's something off-putting to me in how they 'play it safe' in their choices of what to cover. They've always been a mag that preaches to the choir in my eyes - giving props to movies that are already fan favorites whether they be old (My Bloody Valentine '81) or new (Martrys). I much prefer Fango's practice of getting new blood on their cover every issue - even when that new blood turns out to be the likes of Queen of the Damned or Van Helsing. Even if those cover choices are concessions to studios, that's fine. The actual reporting is always even-handed and if there's a big new horror release coming out - whether it be Lost Boys, Jurassic Park, Peter Jackson's King Kong or The Mist - it should be on the cover of the world's biggest horror magazine.