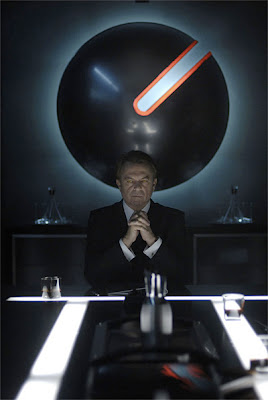 I don't begrudge anyone who's a fan of that Twilight stuff but it sure isn't for me and even though the HBO show True Blood has gotten some acclaim, I just can't shake my disdain towards love stories about vampires. Ever since I was a kid and I saw Frank Langella's face on the poster for the 1979 Dracula remake and wondered how in the world a guy who looked that lame was supposed to be scary, I've known that sexy, seductive vampires are generally not my thing. Even the best Dracula's, like Lee, Lugosi and Jourdan, were just pretty boys to me. Barlow from Salem's Lot - now that was a vampire.

So imagine how my face lit up with boyish excitement at the promising trailer for Daybreakers - a film that looks to be the vampire apocalypse movie that Blade III (2005) should've been (about damn time!). I couldn't make it all the way through the Spierig Brother's first film, Undead (2003), but Daybreakers looks like a Variety Pack of awesome. Sam Neill looks rocking as a vampire as does William Defoe as a Whistler-esque vampire hunter. Even if this turns out to be total trash, it'll be my kind of trash. If they can make so much trash for other people, they better keep making it for me, too.

Email ThisBlogThis!Share to TwitterShare to FacebookShare to Pinterest
Labels: Daybreakers

Heh...I just posted a blog about this film too. I prefer my vampires to be on the bad-ass side as you do. Daybreakers looks very cool and I really like the premise, so I will definitely be checking this film out when it's released.

I'm actually with you on the vampire-love story thing. It feels very pat and tired too me. I don't know if this is because I find the concept problematic (predator-prey romance seems like such a bad idea) or if I've just seen it done to death.

While it wasn't a great flick, I enjoyed the sort of land-shark model of vamps seen in 30 Days of Night. If you're a monster, then be monstrous, you know?

Matt, CRwM - glad you're with me on the issue of bad-ass vampires! I don't know if I have a conceptual problem with the romantic vampire angle or if I just can't get past my childhood perception of it as being lame. I think it's more of the later.

As for 30 Days of Night, I had high hopes for that film but once the initial attack on the town is over, so is the movie as far as I'm concerned. That's a film that completely shot its wad up front and had nowhere to go after that.