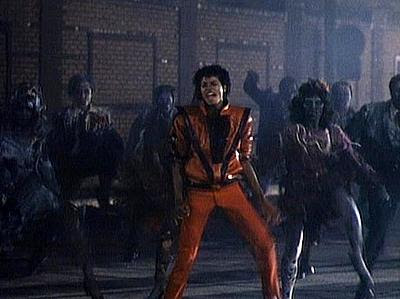 It's been awhile since a celebrity death has left me feeling shell-shocked but the sudden passing of Michael Jackson at age 50 has certainly done it. While almost every article commemorating his death will be obliged to mention how his bizarre personal behavior had nearly eclipsed his talent, it's only because its true. Besides being a blazing, one-of-a-kind talent, he was also a blazing, one-of-a-kind oddity. Before sexual accusations permanently tainted his image, Jackson was just a wealthy flake ("Wacko-Jacko") with a passion for chimpanzees, plastic surgery and, allegedly, the Elephant Man's bones (strictly a tabloid rumor). But what horror fans will remember Jackson for, aside from penning the title ballad for the killer rat classic Ben (1972), is the John Landis-directed music video Thriller.

For many fans born in the early '80s, Thriller was their introduction to horror. And what was cool about Thriller was that it was something even a confirmed horror junkie could enjoy. After all, there was a Forry Ackerman cameo, Vincent Price's rap and closing cackle, and FX God Rick Baker delivered feature film-caliber goods with some of his most memorable creations. The were-cat that Michael turns into is simply awesome (I love it when he knocks a tree over with a swipe of his hand!) and while everyone remembers the dancing zombies, what I loved as a kid was the brief moment where Michael and Ola Ray are surrounded by the undead and Landis pans over to a zombie oozing blood out of its mouth. That, to me, made Thriller a real horror movie - that, and the title card that stated that Thriller didn't endorse Michael's belief in the occult. When you have to put something like that in front of a movie, well, it makes it seem like it's The Exorcist or something.
Call it a long form music video, call it a mini-film, Thriller deserves to be remembered as one of the most influential horror movies of the '80s. And best of all, it's one that will likely be immune to a remake.
Posted by Jeff Allard at 4:18 AM

THRILLER was something amazing. I remember when it premiered, it was such an event! Us kids were watching it our parents and even grandparents! And it didn't disappoint, that's for sure.

Yeah, I didn't have cable when Thriller first premiered and I rememeber seeing it at a friend's house for the first time and loving it. I still hadn't been allowed to see films like An American Werewolf in London, The Howling, or Dawn of the Dead yet so to get a taste of that kind of stuff in a music video was, well, a thrill.