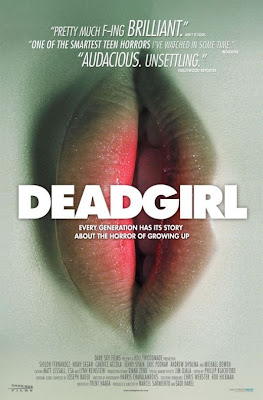 On the whole, seasoned genre buffs usually don't find much to be appalled by but the new indie film Deadgirl, co-directed by Marcel Sarmiento and Gadi Harelmight, might prove to be an exception. This is a film that boasts a genuinely queasy premise - if hard-up, socially regressive high school dudes came across a naked woman, chained to a bed in an abandoned hospital basement, and who just happened to be a zombie in no position to protest her mistreatment, would they fuck her? And the answer is: "of course". Not everyone would, no, but for some a free lay is an irresistible proposition. At that is just one of the nasty truths that drive Deadgirl.

I recently reviewed Deadgirl for Shock Till You Drop and while I felt that it didn't quite hit the mark as well as it could've and I gave it a corresponding 6 out of 10 review, I also think that it ranks as something more than just an interesting failure. It bottoms out too far from the finish line but yet I have a feeling that Deadgirl will have a longer stay in my thoughts than some movies that were more accomplished over-all. What it says about male sexuality and men's victimization of women has the uncomfortable air of truth and that makes it hard to push aside.

The main perpetrator of crimes against this dead girl, J.T. (Noah Segan), is a very plausible lowlife. As written by Trent Haaga and portrayed by Segan, J.T. is a loser's loser. What this dead girl is to him isn't just an outlet for his sexual frustration, but a receptacle for the anger he carries against his whole powerless, disenfranchised existence. J.T. doesn't just like to have sex with the dead girl, he enjoys brutalizing her as well. Ostensibly, he's had to harm her to prove to himself and others that she isn't, well, alive (as though that alone gives him permission to do what he pleases) - but the extent that he inflicts injury on her speaks to a rage that goes beyond sexual frustration. It's the kind of adolescent rage that fueled tragedies like Columbine - a selfish rage that inflates the importance of one's own pain but yet can't perceive the pain of others.

As a psychological study, Deadgirl is potent stuff to a point. It convincingly suggests that all some boys really want from the opposite sex is a black-eyed vessel to abuse in any way they please. As it progresses, though, Deadgirl loses some of its acuity to the service of plot points. It begins to feel less organic as more characters are introduced and the strengths and weaknesses of all the characters begin to feel more scripted than natural. As it gets closer to its third act, Deadgirl's moves become more conventional - even including a (living) damsel in distress during the climax as J.T. evolves into more of a scheming villain with plans of recruiting a reluctant buddy to his cause - and that, well, kills it.

I sorely wish the second half of Deadgirl had been as discomforting as the first. While it'd be wrong to accuse Deadgirl's conclusion of going soft (no pun intended), in making J.T. into a bad guy doing bad guy things, Haaga and directors Sarmiento and Harelmight minimize the troubling elements of the character and of the film as a whole. What we see early on in Deadgirl aren't actions born of love, or of friendship, but those of cold, clammy self-interest.
Posted by Jeff Allard at 8:25 PM

This sounds messed up, so of course I am going to watch this! How did I not hear about this film before?

It's pretty easy to have missed hearing about Deadgirl - it hasn't gotten too much attention yet. But it's definitely worth seeking out.

Helluva unique premise...too bad it sounds like they tripped a bit in the execution. Still, I'll keep a lookout for it.

Yeah, I didn't think it was a wash-out by any means - I just felt it got too conventional towards the end. Still, the performances are all great and it has a lot more ambition than most indie horror does these days.

Ok, I'm way late to the party on this one but I'll comment anyway... I watched it last night and remembered that I'd seen you mention it somewhere along the line.
This movie pretty darn interesting... and I kind of don't think it was a zombie movie... or at least a very atypical one.
There is some strange stuff going on in the corners... the dog who seems to be guarding Deadgirl in her prison, the glimpse of the strange plant growing up through the floor, Deadgirl's sudden burst of strength to rip that steel door off its hinges to escape (suggesting, possibly, that she could have escaped all along).
Some of her actions/reactions are not what I'd expect from a typical movie-zombie either.

I'm inclined to suspect that Deadgirl was using her abusers as much or more than they were using her... that she was a trap of her own devising.

Knob, I definitely found Deadgirl to be intriguing but its climax felt too pat and conventional to me. It's downbeat but downbeat in an uncomplicated way. I don't know if I already said this in the blog above as I haven't reread it but I think it would've been a more chilling ending to see the lead character have moved on to a "normal" relationship with a living girlfriend but yet he can't get sexual satisfaction from it. To have him simply turn the girl he has a thing for into a zombie after she's been mortally wounded isn't quite the same. I think the idea of him losing the deadgirl (because she escapes or whatever) and then trying to make a go at a normal relationship but having this 'happy ending' obscured by a sexual deviancy that will likely haunt him forever seems like a more troubling and ironic conclusion.

Thanks for taking the time to come back to this old post and leave your thoughts, Knob!