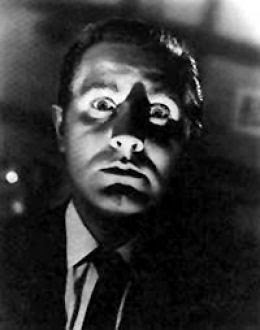 Confession time: I've never seen an Ed Wood movie. I've seen parts of them, in the course of late-night channel surfing way back when, but never a whole film from beginning to end. For that matter, I've also never seen an H.G. Lewis movie, an Andy Milligan movie, or an Al Adamson movie. While almost every exploitation fan is familiar firsthand with the work of these heroes of Grade-Z cinema, I've let them pass me by entirely. I've never even watched a Ray Dennis Steckler movie, even though I believe that anyone who utilized the pseudonym 'Cash Flagg' is automatically worth admiring. With so many cherished bodies of work left unwatched my me, I have to belatedly question why that is.

In the case of Ed Wood, I can pinpoint my reluctance to explore his films to the first place that I discovered them - Michael and Harry Medved's 1980 book The Golden Turkey Awards, a 'celebration' of bottom of the barrel cinema that is credited for giving Wood's 1959 opus Plan 9 from Outer Space its reputation as the worst film ever made. Reading The Golden Turkey Awards was the first time I was introduced to the ironic school of film appreciation in which fans revel in a filmmaker's ineptitude and incompetence. In the case of Wood, there's a whole legendary oeuvre of films to mock, deride, and snicker at. Even as a kid, though, that perspective on movies turned me off. I love more than my fair share of so-called "bad" films, but I've always gone into them with the sincere hope that they'll be good. I never use the term 'guilty pleasure' to describe something I like and I bristle when people qualify their enjoyment of a film with the cop-out of "it's so bad you have to love it!" That's a half-assed way to embrace something and that doesn't appeal to me. So early on, Wood's inclusion in the Medveds' book tainted his work for me. After reading The Golden Turkey Awards, it seemed like to be a part of the cult of Ed Wood meant being a party to douchery.

Wood's personal story, though - with his indefatigable ambition and mad dreamer's persistence - is one I love. And I suspect if I had encountered his work on my own I might've embraced it and probably resented its eventual enshrinement in the annals of underachievers. But the heartfelt entries in Cinema Styles' Ed Wood Blog-a-Thon are proof that when it comes to appreciating Ed Wood, it doesn't have to be about snarkiness. I should probably take it on myself to further my experience with Wood's films but it seems too late for that now. My interest is in the future, for that is where you and I are going to spend the rest of our lives.
Posted by Jeff Allard at 10:03 AM

Great post. I have seen some of Wood's films, and it can be hard to make it through. But there is a lot to be said for the effort put into them, even if the talent wasn't there to back it up.

Yes, you should watch a Wood, an Milligan and an Adamson, and yes, they're as incompetent as you fear. But you WILL, especially knowing what you're in for, recognize the sincerity and effort that went into their productions. It ain't too late.

I too have never sat through an entire Ed Wood film. However, I think Tim Burton's Ed Wood is great -- it's the film that made me take Johnny Depp seriously as a vastly talented actor.

And as far as H.G. Lewis, you owe it to yourself to at least watch Blood Feast. It's so over-the-top with the blood and gore, you'll forgive the laughably bad acting.

Lewis is now considered a guru in the world of direct marketing. In my line of work, I've met him on several occasions -- very personable and self-effacing.

Wings, Marty, FF - thanks for the comments! It's funny - at this point it's not as though I'm actively avoiding seeing a Wood film but more a matter of other things always coming first. I don't know how younger fans just getting into horror/sci-fi/exploitation today can possibly catch up on everything. I always have a stack of new films on deck to watch in addition to the many older favorites in my collection that I'd love to take another look at.

As for Blood Feast, I remember Fangoria devoting a full color page to a Dr. Cyclops review of it back in the day and being blown away from the stills by how ghastly it looked!

I've always managed to enjoy Ed Wood's movies without the irony factor... I saw a few of them on TV as a kid without any hipsters around to comment on how bad they were.
The main problem with them is just that they never had the budget to pull off any of Ed's big ideas.
I'm pretty sure I've seen much worse movies disguised behind zillion dollar effects budgets... that didn't have anywhere near the heart that Wood's efforts had.

You really do owe it to yourself to at least watch 'Plan 9' and 'Glen or Glenda'. For all their ineptitude, they are genuine and sincere cinematic statements, and 'Plan 9' especially just has everything in the way of classic horror/sci-fi atmosphere you could want.

I used to love the 'Golden Turkey Awards' as a kid, and I still owe it a debt for pointing me in the direction of several movies I still enjoy to this day. But now, I just look at it as kind of an elitist book written by people who just don't get a lot of the movies they trash. I will remain an Ed Wood fan (and an H. G. Lewis and Cash Flagg fan) forever. I'd much rather watch one of their earnest failures than most of the competent but mediocre horror/sci-fi/fantasy films that flood video stores these days.