A Heads-Up On The Collector 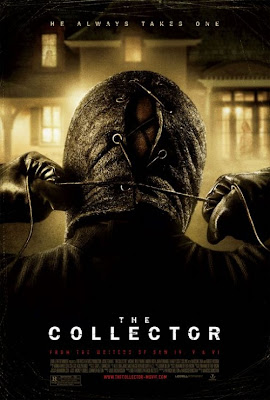 The short version of what I'm about to say over the course of this review is this: if you value your time, stay the fuck away from The Collector. If you just need to know what's up with The Collector in a word or two, I'm telling you straight-out: It Sucks. The Collector has permanently extinguished any desire on my part to see any further efforts from the writing/directing team of Marcus Dunstan and Patrick Melton (The Collector marks Dunstan's directing debut). I was hoping that being the writers of the last three or so Saw movies wasn't proof that they didn't have any business dealing in horror but The Collector has put a nail in that thought. I'm sure they're great guys and all and I hate to begrudge anyone for living their dream, but The Collector is a big sucking hole of nothing if I ever saw one.

The premise here is cool - a thief desperate to come up with the cash to cover his girlfriend's loan shark debt goes to pull a job at a remote house at which he's been doing construction work. Once inside, though, he discovers that - oh, shit! - the family is being held hostage and tortured by a psychopath with a flair for ingenious death traps. But in telling this story, Dunstan and Melton fail to make any fucking sense, to provide even the barest motivation for their killer, or to tie up even one dangling plot thread. This is not a case of artful ambiguity, it's a case of raging incompetence.
First, there's the physical impossibility of what The Collector is up to, which goes way beyond demanding a healthy suspension of disbelief on the part of the audience. This character would have to spend at least a full fucking weekend in this house with a crew of assistants to rig it up the way that he does but yet we're supposed to believe that all these death traps - involving pulleys, wires, acid, razor blades, and spikes - were set up in the span of a few hours. And as The Collector clearly took the family hostage (save for one junior member who's in hiding) in the basement prior to laying these traps on the above floors - the question then becomes one of who, exactly, are these traps even meant for? It's not as though The Collector knows that the thief will be crashing the party and no one else in the house is going anywhere. Far be it for me to tell a serial killer how to manage his shit - but wouldn't The Collector's time be better spent torturing his hostages rather than getting out a ladder to hang knifes from the chandelier?
At least in the Saw films, as incredulous as I may find them, there's a half-baked logic behind Jigsaw's traps. They're always made with a specific purpose in mind. In The Collector, it's like "um, just in the chance that someone - I don't know who - might possibly come into this hallway to pull a golf club out of this caddy bag, I've got an elaborate wire and pulley system rigged up to yank them to the ceiling!" And maybe this is next gripe is just my own hang-up but after watching a movie called The Collector, I feel that the most basic question that ought to be answered by the end of the film is what this psycho is fucking collecting and why! But as the end credits rolled here, I still had no clue. Yes, we know that he takes one living victim from each home but the movie never gives a satisfying answer as to why. One captive says that he's being used by The Collector as bait - as if that says it all - but we see no indication of how that actually plays out. Bait in what way? Bait is something that you use to bring someone to someplace they wouldn't normally go. But the people The Collector goes after are already in their own homes. Why "bait" someone if they're already where you want them to be? And if you really need someone to go someplace specific in their own home, do what always works - make a noise! It'd be a lot more efficient than hauling around a trunk with a struggling human being in it.
And while anyone who's seen Rob Zombie's Halloween (2007) knows that backstories for killers can be tiresome and unnecessary, here there really needed to be some kind of explanation as to why The Collector was targeting the people that he goes after. At least give some insight - as Michael Mann's Manhunter (1986) did - as to how he chooses his prey. There is a nod to how he comes across these households but the level of preparation that The Collector exercises deserves to be addressed by more than just - "oh, yeah - that dude delivered a pizza to their house! That's how he knows to go there!" That's not the actual scenario that we see happen in The Collector by the way, but it's awfully close.
While The Collector is pretty grisly, which will surely win it some undiscriminating fans among the gore set, unless my brain starts hating itself I sure as shit won't be adding it to my DVD collection.
Posted by Jeff Allard at 4:43 AM

Huh. My brother mentioned seeing the trailer for this, although he had forgotten the name. Now I guess I don't have to worry too much about seeing!

No worries - this won't be the last crap movie I watch, that's for sure!

I had a bad feeling about this one since I saw the first trailer on television. Now I see that bad feeling is supported by someone who has actually seen the film.

I thought I had heard some good things about the film, so it's too bad that you are reporting its suckiness. I will be a lot less likely to seek it out now, so thanks for the warning.

Geof, Matt - I was surprised at how lousy The Collector was because sites like AICN and Bloody Disgusting had run enthusiatic reviews for it. What other people saw in this movie besides gore, I don't know, but I thought it was all kinds of shitty. Maybe it's just me, though.

... sites like AICN and Bloody Disgusting had run enthusiatic reviews for it.

Well, that's why you have old Arbo... he'll never steer you wrong.

True, Arbo! Although Maitland McDonagh just posted a positive review of The Collector so, really, what do I know?

When I saw the ads for this movie, I thought maybe it was going to a be a more faithful adaption of John Fowles' controversial novel (with all due respect to Terence Stamp and his 1965 film version). Oh well...

Yeah, nothing to do with Fowles' novel. Although given how inept this movie is - that's probably a good thing!