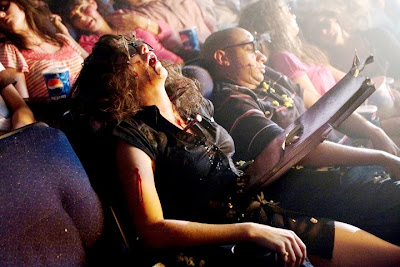 Whenever a new 3-D film is announced, I inevitably see comments online from fans griping about how 3-D is just a gimmick and a cheap fad. These complaints always strike me as hilarious - especially coming from horror fans. When people whose movie collections are likely home to a lot of straight-up garbage are so concerned about the sanctity of cinema, that's some funny shit! I mean, honestly, as a horror fan whose own movie collection is brimming with B-movie detritus, I feel like I should be the last person to bitch about how 3-D, of all things, is eroding the quality of modern movies.

But if you do have a stick up your ass about 3-D, The Final Destination will vindicate all your bitter complaints about the format. This is a film that has no reason to exist outside of exploiting the 3-D experience. Up until now, this year's My Bloody Valentine 3-D was the best modern 3-D horror film (not that it had much competition) but while MBV 3-D may remain the better film overall, The Final Destination is really the 3-D horror film I've always wanted to see.
When 3-D briefly came back in the early '80s, I was too young to see R-rated films but I knew that in Parasite ("the first futuristic monster movie in 3-D!" as the posters claimed) there was a scene where someone was impaled with a length of pipe and that blood dripped out of it over the audience (nice!). And I was told that in Friday the 13th Part 3, Jason squeezed someone's head so hard that one of their eyeballs popped out of their head and off of the screen (eeaugh!). As a thirteen-year-old in 1982, I couldn't believe how incredible these movies sounded! 3-D gore was where it was at! Sadly, though, it didn't take long for the 3-D craze to fade out. But as soon as I saw how much the technology had advanced with Beowulf (2007), I knew that 3-D would be coming back in a big way. And where there's 3-D, there's always 3-D horror films.
Some would say that The Final Destination lacks interesting characters, an involving storyline, or any imagination outside of its scenes of slaughter. And they'd be right. But then again, this is a movie where someone is slammed into a wire fence with such force that diamond-shaped chunks of their body are squeezed through it and these bloody chunks then come loose and fall into the audience. That's where this movie's priorities lie and if you don't recognize that, you need more than 3-D glasses to see. To the credit of director David R. Ellis (encoring from 2003's Final Destination 2) and screenwriter Eric Bress, though, The Final Destination is always smartly self-aware. Whatever faults you might cite about this movie will not be news to its makers. What Ellis and Bress do well here - outside of expertly exploiting the 3-D - is have fun playing up the ghoulishness of the series (the opening credits are brilliant, replaying in X-Ray vision several deaths from the previous FD installments) and gleefully prolonging the audience's expectations of when and how each character will meet their maker. This is an aspect of the series that I think has been its strong suit all along, the constant reminder that death is always around us, hiding in plain sight. No matter what harrowing death one might escape, another one is waiting in the wings.
While I liked My Bloody Valentine 3-D, I think the makers of MBV 3-D felt some reluctance at their film being tagged as a cheesy 3-D horror movie and so they kept the reminders that it was a 3-D film in check. MBV 3-D was still a lot of fun just the same but thankfully the makers of The Final Destination aren't as worried that you might think their movie is disposable junk. In fact, they make it impossible to see it any other way. In the course of its slim 82 minutes, The Final Destination is out to claim the 3-D horror crown and even though it pretty much earns that honor in the first ten minutes, director Ellis doesn't take his win for granted. Instead, he acts like he has competition on his ass right up until the end credits.

Notably, The Final Destination is the first FD movie to deliver a rousing climax. Even in Ellis' otherwise exciting FD2, the film disappointingly petered out before the end but in this fourth go-round, FD's producers have learned to save something good for last. Here, there's a climatic scene inside a mall that rivals the opening race track disaster. Perhaps realizing that this would be the last of the series, the producers wanted to ensure a spectacular farewell. But while some would say this 3-D blowout should mark the natural end of the series, I think there's one more date with death that still has to be met. Let me just put a bug in the ear of FD's producers now for Final Destination 2012: Death's Big Score. The series needs to leave us with one final lesson: if you're going to die, let it be epic.
Posted by Jeff Allard at 3:53 AM

Jeff,
You've convinced me! I'm there.

I saw FD2 first and was really impressed with it; I think it's better than FD (haven't seen FD3, though), and I look forward to the craziness Ellis has planned.
--Ivan

Yeah, it's definitely a good time. I would put it on more or less even footing with 2. It might not be as good in some ways, but then there's the 3-D to enjoy so it works out.

Anyone seen that used video, blood on my hands? kind of reminds me of the movie in a bloody, gory kind of way hahaha. check it out on their myspace: http://vids.myspace.com/index.cfm?fuseaction=vids.individual&videoid=61130701

I don't need no more convincing.
I'm really looking forward to seeing this one and not at all concerned about being disappointed.
I love movie gimmicks like 3D, Sensaround, color and sound... what'll they think of next?!!
(would have loved to have been around during William Castle's heyday).

This will also be the first FD I've seen in the theaters... I was late to supper on the other ones and had to settle for tubing it.

Hey Knob, you definitely need to this in theaters if you plan to see it. It's a formula film all the way but it's smart enough to know exactly what it is. It's all about the kills and the kills are pretty sweet. Hope you end up digging it!

Great review man. So many critics have been saying this is bad cinema but you have the same view as me. TFD achieves what it sets out to do. Entertain. This wednesday will be the third time i see it and i agree about another FD it just had two weeks top of the BO so New Line would be crazy not to do another one.

Wow, Ghost - three times? Way to show your support! I'm glad to see TFD making an encore at the top of the box office as it really is a fun flick with no pretentions about itself. As for a fifth FD, I think they might wait awhile on it but it'll happen.

I've seen 'The Final Destination' six times already and it just gets better every time, you see things that you didn't catch the previous five times. This one incorporated great effects and thrilling deaths, not to mention laughs. I do feel that it sacrificed some of it's original elements to the 3D. But it was worth it! Suck on that Mike Myers.

Saw it last night, was a whole lot of fun. I think they should have used a lot more 3-D gimmickry, but I love me some 3-D. One of my greatest childhood betrayals (along with my mom giving all my Star Wars toys to charity) was when my Dad lied to me about going to the movies and took my brother to see Friday the 13th Part 3 in 3-D. Bastards! I hear it's out on Blu-Ray in 3-D. Know anything about that and the quality thereof?

Blue, glad to hear you got a kick out of TFD! As for Friday 3 on DVD, if you're hoping for a great 3-D experience with that, don't bother. Yes, you can watch it in 3-D but it's pretty half-assed, unfortunately.