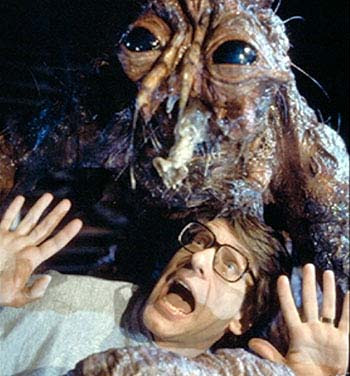 That David Cronenberg's 1986 remake of The Fly would be due for a remake of its own isn't so surprising. But the idea that Cronenberg himself would be returning to write and potentially direct the remake himself (see The Hollywood Reporter's story here) is a little astonishing. Cronenberg has been drawn back into the web of The Fly in recent years, working on the opera version of the film, but his willingness to make another movie based on the material is hard to figure. But since this is Cronenberg, who has yet to see his talents spiral down the drain, I think it's safe to assume he'll be coming back to The Fly armed with some visionary concept of how to reapproach it. And it should be remembered that Cronenberg himself didn't write the '86 version - it was Charles Edward Pogue (even though Cronenberg did his own rewriting, I remember an interview at the time where Cronenberg said that most of the ideas in The Fly screenplay that people would likely peg as coming from him were actually in Pogue's original draft) so we really haven't seen a Cronenberg-penned Fly yet. I just wish that - as long as he's up for the idea of remaking his films - he were also involved in the proposed remake of Videodrome. Now that's a film that really needs his sensibilities to work. As for The Fly, the original (well, the original remake, I should say) probably isn't even my top five favorite Cronenberg films (let me think about that...no, it's not - but it's close) but it's still an amazing movie. Twenty-three years later, it's still the movie that Cronenberg's most known for. I can't imagine that he feels the need to step back to The Fly just for commercial reasons - History of Violence and Eastern Promises were two of his finer movies and both seemed to do respectable business as well. But whatever the case, I'm ready to take another deep, penetrating dive into the plasma pool.
Posted by Jeff Allard at 5:36 AM

Perhaps Cronenberg was influenced by his time spent with the opera; in theater, directors mount the same show many times over a career, often with very interesting results. I'm just grateful that he seems to have lost interest in that Robert Ludlum thriller with Tom Cruise. That's a job for Tony Scott, and a waste of Cronenberg's abilities.

I'd also love to see him take up the Painkillers project again. I know he's said it feels like familiar territory, but who wouldn't want to see him tackle the subject of radical surgery as performance art?

Finally, consider this - by the time the re-remake hits screens, his first take on it will be at least a quarter century old. And I'll officially be a member of AARP. Man, time for some New Flesh...

Yeah, I'd much rather see Cronenberg revisit The Fly than tackle the Ludlum thriller. And I'm sure you're right that his work on the opera might've sparked his imagination in some way. I hope he has a great concept for the remake as of the great genre directors of the '70s and '80s, he's the only one who has never hit the skids creatively.

Wow, I'd missed this bit of news. I knew about the opera but not the re-remake! Cronenberg was always a terrific filmmaker but goddamn he's gotten even better; Eastern Promises was stunning. I can barely imagine what he could do with Videodrome today.