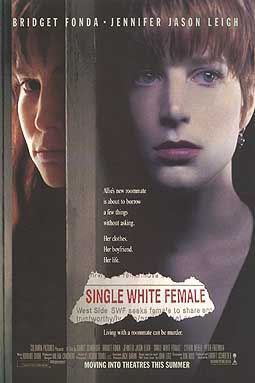 In the slasher films of the early '90s, it wasn't about invincible boogeymen anymore. No more heavy-breathing dudes in ski-masks stalking slumber parties. Now it was about the outwardly normal people who worked with you, who took care of your kids, who you were dating, who were your neighbors or tenants. Or, as in the case of 1992's Single White Female, who could be your newest roommate.

These movies weren't as down and dirty as the early '80s slashers had been but yet they were more serious about scares than most of what passed for horror at the time. You know, if you wanted a good seat-jumper, you were better off with something like The Hand That Rocks The Cradle than Children of the Corn II: The Final Sacrifice.

Like most cinematic trends, this one ran its course in about five years - falling out of favor just in time for Scream (1996) to re-invent the slasher genre again. But while it lasted, it was great fun. When Obsessed came out last year, I got all excited thinking that the "blank from Hell" genre was making a comeback. That was the movie where Ali Larter plays a temp worker who sets her sights on her handsome, well-to-do boss and gets violent when her planned seduction of this married man (and new father) hits some road bumps. It looked great and it looked like it could've came out in '92, smack at the height of the yuppie slasher trend. In the end, though, it was just so-so. It was adequate but it just didn't have the flair that the psycho flicks of the early '90s had. They really knew how to do crazy right back then.
To read my full Single White Female review, click here.
Posted by Jeff Allard at 4:22 AM