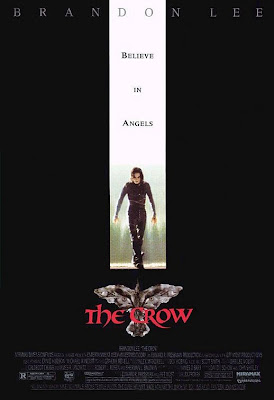 I still remember being taken back by the first shot of The Crow, as the camera glides over an inner city hellhole. I don't know exactly what I had expected from the look of the movie, but I knew that I didn't expect anything so stunning - not from a modestly-budgeted adaptation of a little-known comic. Thanks to the internet, it's so hard to be surprised by movies these days but in '94, it was pretty easy - even for a hardcore movie junkie - and from the get-go, The Crow definitely surprised me.

Nowadays, it's common - even mandatory - for filmmakers to "get" comic books. Many still don't - as Jonah Hex proves - but on the whole, Hollywood is more comic-literate now than at any time previously. But in the early '90s, studios and directors were still figuring out how to translate comics to the screen. Unlike, say, the directors of Spawn, Steel, or Judge Dredd, Crow helmer Alex Proyas had a natural affinity for the material he was adapting (by all accounts, star Brandon Lee shared the same affinity) and that made The Crow a true eye-opener.

The day the story broke that Lee had died, I kept hoping the news would turn out to be a hoax. It just seemed too sad to be true. Watching Lee's heartfelt, would've-been-star making performance in The Crow all these years later, it still does.
To read my full Summer Shocks review of The Crow, click here.
Posted by Jeff Allard at 3:42 AM

I have to agree with you on watching this one. The real situation just makes it all the sadder. To this day this is one of my favorite movies.

Yeah, I love this film too. It still holds up despite the look of the film cribbing from BLADE RUNNER and Tim Burton's first BATMAN film. That being said, the Wachowski's MUST HAVE been influenced by THE CROW as their cityscape within the matrix bears more than a passing resemblance to the city in THE CROW.

I also think that the soundtrack for this film is pretty incredible with a slew of alt. rock bands like Jesus and Mary Chain, The Cure, Nine Inch Nails, My Life With the Thrill Kill Cult and metal bands like Pantera and Helmet. Quite an awesome mix and it's a soundtrack album that I still pull out and listen to on the odd occasion.

Frog Queen, I'm glad Lee's family allowed the movie to be finished and released. It would've been a shame if his performance had gone unseen.

J.D., thanks for bringing up The Crow's soundtrack. I wish I had made mention it in my review as it's such an integral part of the movie's appeal. It's so of its moment and any time I hear "Big Empty" by STP it takes me right back to those days.

Read your post yesterday and rented the dvd today.

I'm excited to 'experience' the film again, thanks.

/and I see they still haven't fixed the comments on Shock. Too bad, I'd really like to follow their posts.

I hear you, MB. I've wanted to comment on some of these Summer Shocks posts myself, if just to thank people for commenting but I can never get my stuff to go through. It's frustrating.

Anyhow, glad you liked the write-up. Hope The Crow still holds up for you!