1979 was a banner year for horror. We're talking about the year that brought Alien to movie screens. And Phantasm. And The Brood, among others. Horror was entering a boom period kicked off by Halloween's success in '78. Sadly, I couldn't experience much of it first hand. In '79 I was still far too young to see any of the theatrical releases of the time, leaving me to get my horror fix on the small screen. 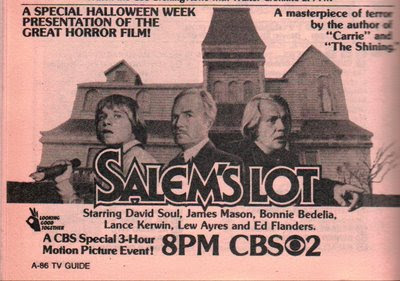 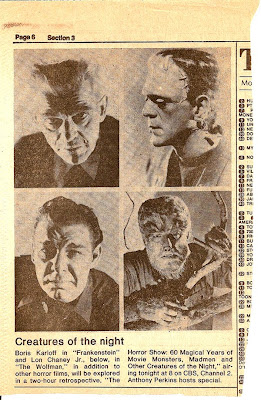 I didn't feel too deprived, though, what with Tobe Hooper's adaptation of Stephen King's Salem's Lot arriving on CBS in 1979. Also airing on CBS that year was The Horror Show, a two-hour retrospective on horror in cinema - from the silent film era all the way up to the present day. Screened in theaters outside the US (see the poster at the top of this blog post), "60 Magical Years of Movie Monsters, Madmen And Other Creatures of the Night" was how the special's content was described. Time Magazine critic Richard Schickel wrote and directed and Anthony Perkins served as narrator and host.

At the time, I didn't know anything about Schickel's credentials as a critic. I don't even think I had read much in the way of movie reviews at all up to that point. Critical insight was not what I was tuning in to this special for. I just wanted to catch a glimpse of as many horror movies as I could during the clip-heavy show.

It's probably impossible for younger generations to imagine not having instant access to virtually any movie but in the pre-home video, pre-cable, pre-internet world, there were many, many films that fans had - frustratingly - only been able to read about. I looked to The Horror Show as a rare opportunity to see more than just still pictures in books and magazines of movies both new and old that I only knew through their reputations. I didn't know exactly what clips were being shown but given how few horror films I had been able to see up to that point, I knew there was a better than average chance that I would be seeing a lot of footage that was new to my eyes.

And even to see clips from movies that I was already familiar with would be a treat. Not being able to own movies (looking over the thousands of titles in my collection, it's hard to remember what that was like now), and having to wait until some TV station would schedule a repeat of, say, Frankenstein (1931) or King Kong (1933) to see them again meant that any chance to see a favorite scene again was not to be taken for granted.

I begged my mother to let me stay up and watch The Horror Show, even though the fact that it didn't end till ten o'clock end meant it ran well past my bedtime. She consented, and I was glued to the TV from start to finish, loving every minute of it - although I did get impatient waiting for the show to get to some of the newer horror films.

The Horror Show only aired once (I'm guessing around October), and in those pre-VCR days, I was unable to preserve it to rewatch. But I always thought about it and always looked for it at conventions over the years. Now, thanks to the miracle of YouTube, I've finally been able to see it again after - choke! - thirty-two years.

Unfortunately, it doesn't hold up. Schickel's narration is rife with the kind of empty armchair psychology critics like to use to explain why audiences are drawn to horror, coupled with bland observations about the movies themselves.

At the time, those omissions sailed over my head (not only had I not seen any of those films but outside of Halloween, I don't even think I knew they existed) but now their absences are so glaring. And for the special to end by focusing on sci-fi films like Fahrenheit 451 (1966), Colossus: The Forbin Project (1970), The Omega Man (1971), and Silent Running (1971) and completely fail to mention George Romero or rising stars like John Carpenter or David Cronenberg...well, it shows that Schickel didn't have much of a handle on modern horror.

At the time, though, neither did I. I just knew I was fascinated by monsters and madmen and aliens and I was eager for anything that catered to my interest. The Horror Show pre-dated my exposure to FANGORIA, or Famous Monsters (for whatever reason I hadn't encountered either magazine at that point) or Stephen King's non-fiction essay, Danse Macabre (1981). As a study of the genre, The Horror Show has proven to be all but entirely useless but as it was my first primer on the history of horror I can't help but regard it fondly.

If nothing else, I have to marvel at the passage of time The Horror Show represents. The Silence of the Lambs (1991) just celebrated its twentieth anniversary but in 1979 Psycho hadn't even reached that milestone yet. It's so odd to be reminded of a time when the likes of Psycho, The Exorcist, Texas Chain Saw Massacre and Halloween were all part of recent history.

What a shame, then, that The Horror Show did such a poor job of documenting that time when it was still fresh. For helping to stoke the fires of my then-burgeoning fandom, though, I have to always be grateful to it.

Below is the complete special. The final installment couldn't be embedded but I've posted the link.

http://www.youtube.com/watch?v=bl9Bb2gAWLU&feature=related
Posted by Jeff Allard at 4:47 AM

Clip shows like 'The Horror Show' and 'Terror In The Aisles' always put me off... mostly because of the lame commentary and the uninspired choice of clips.
They seemed like a way of cashing in without creating any new content.

Saying that... I love a well written horror documentary that has a focus.

Yeah, The American Nightmare (2000), which focused on how the horror films of the '70s reflected the social upheaval of that decade was a very good one, I thought.

Judging from the title of this post, I naturally assumed that this would be an in-depth essay on House III: The Horror Show. After all, you're clearly enamored with Brion James. Ever seen Mutator? It's a pre-Sleepwalkers flick where James battles cat monsters!

Thanks for posting this, Jeff!

My father recorded this back when blank VHS tapes were $20 apiece, and I probably watched it half-a-dozen times as a kid.

I've made a few net searches over the past few years looking for it, but couldn't remember the title and always came up with nothing.

Thanks again - the mystery is solved.

Dom, I haven't seen Mutator yet but based on your description I feel like I really need to!

Radio London, glad I could solve that mystery for you!