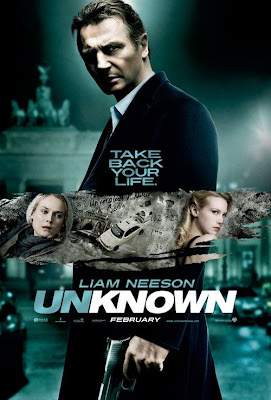 A lot of lazy reviewers have referred to the new Liam Neeson thriller Unknown (based on the 2003 French novel Out of My Head by Dider Van Cauwelaert) as being just another version of the actor's sleeper hit Taken. But, outside of the fact that Neeson is in a European city again (Paris before, Berlin this time) and kicking ass again, the two movies are completely different. Unlike Taken, in which the daughter of Neeson's character was kidnapped, the only thing that's been kidnapped here is the identity of Dr. Martin Harris (Neeson), an American botanist traveling abroad with his lovely wife Elizabeth (January Jones) to participate in a biotechnology conference.

As Martin and Elizabeth are checking into their hotel, Martin realizes that he left his briefcase behind at the airport and without telling Elizabeth where he's going, he immediately gets back into a cab to retrieve it. On the way, a terrible traffic accident occurs, sending Martin's cab into a river. Gina (Diane Kruger), the young woman driving the cab, heroically rescues the unconscious Martin before he drowns but she disappears once paramedics arrive on the scene.

Martin later wakes up in a hospital having been in a coma for four days. His memory is fuzzy on certain details and the accident itself is almost entirely blacked out but he remembers Elizabeth and as soon as he can sign himself out of his doctor's care, Martin is on his way back to the hotel to let his sure-to-be-distraught spouse that her missing husband is alive and well.

However, when Martin approaches Elizabeth in the middle of a social function, she reacts as though she doesn't know him and he's quickly confronted by her "husband" - Dr. Martin Harris (Adrian Quinn). Believing himself to be the authentic item, Neeson's character is angry and confused by this charade. But what good is knowing the truth if nobody believes you? Before long, even Martin is doubting whether he is who he thinks he is. Perhaps the excellent Bruno Ganz as Ernst Jürgen, a former Stasi agent turned PI, will get to the bottom of this mystery. Clearly, though, when Neeson's only friend is Frank Langella (as Martin's colleague, Professor Rodney Cole), you know he's in trouble.

With Unknown, Director Jaume Collet-Serra continues to impress. This is not as wigged-out as Orphan (2009) or House of Wax (2005) but it has its share of formula-tweaking moments. With Jones as a mysterious, icy blond (is Elizabeth being forced against her will to participate in this game or is she in on it?), rampant paranoia, and issues of mistaken identity, it seems like Collet-Serra was out to make his version of a Hitchcock film. But instead of a mere homage, there's ample evidence of Collet-Serra's own quirky sensibilities.

For instance, there have been many scenes in many movies in which a character tries to argue with their impostor over who's who. These scenes typically take a back-and-forth "I'm the real so-and-so!" "No - I'M the real so-and-so" approach as the two character take turns arguing. In Unknown, Neeson and Quinn argue their case to a third party who can only stand there bewildered as in the heat of their arguments, both men start to use the exact same words at the exact same time. It's a cool, almost surreal, moment that I bet was an embellishment by Collet-Serra rather something explicitly described in the script.

And without getting into spoilers, I also liked the unconventional way that some characters meet their ends. Not in a "creative death" sort of way but in that the circumstances of their exits defy the standard approach to offing characters in a thriller. You can almost hear the sly chuckle of the filmmaker as expectations are thwarted and subverted.

It's moments like these that make me all the more anxious for Collet-Serra to get back to a project where he has more room to cut loose. I've read that his next film may be a take on Dracula, called Harker, in which Jonathan Harker is assisting Scotland Yard in tracking the legendary bloodsucker. Sounds perfect to me - I'd love to see what Collet-Serra's version of a vampire film would be like. For now, though, Unknown is adequate entertainment. Some have taken the plot revelation of the third act to task as being preposterous but I found the story's twist - which owes something to, of all movies, Total Recall (1990) - to be reasonable.

Unknown isn't a great movie by any means but it is an entertaining one and within the confines of an outwardly conventional thriller, it finds room to rise above the routine. With an opportunity left for Neeson's character to return, if Unknown spawns a sequel - or a whole franchise - perhaps this first film will be redubbed Unknown: Origin.
Posted by Jeff Allard at 3:02 AM

I've been wondering about this one... I like Liam Neeson and the basic idea is drawing me in... partly because it brings to mind the old 'Nowhere Man' TV series.

Yeah, it ends up really being nothing like Nowhere Man but that was the first thing I thought of when I saw the trailers - I loved that show! Too bad it didn't last at least two seasons.