The Unlovely Truth About Time Travel 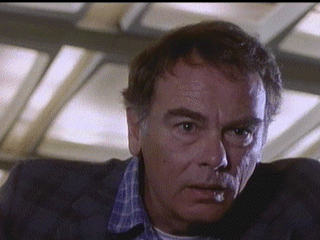 In the 1995 miniseries adaptation of Stephen King's novella The Langoliers, mystery writer Bob Jenkins (Dean Stockwell) ruefully proclaims that he, and a number of his fellow passengers on American Pride Flight 29, have discovered the "unlovely truth about time travel." Finding themselves stuck in an expired moment from the past, thanks to their plane having inadvertently been piloted through a rip in time, they witness a swarm of "Pac-Men from Hell" whose function it is to devour yesterday once it becomes today. As Jenkins notes, this is why no one will ever be able to venture back to witness the building of the pyramids, or to prevent the events in Dallas on November 22nd, 1963. Once the past is gone, it's gone, and woe to anyone who should find themselves out of step with time. 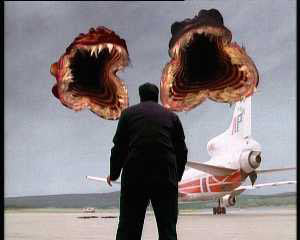 Fantasies about returning to the past are legion - found in everything from Somewhere in Time (1980) to Peggy Sue Got Married (1986) to Hot Tub Time Machine (2010) - but King's tale gleefully slams the door on all that. In his dyspeptic take on the nature of time, every second that ticks past is ruthlessly, efficiently consumed by the toothy "timekeepers of eternity." Essentially, The Langoliers expresses the notion that one must live in the present or not at all.

That's a useful thought to keep in mind. Whether it's because of my age, or because I've been unemployed of late and can't help but feel fearful of the future, I find myself preoccupied with comparing the present unfavorably to the past. Sometimes I even miss the days of getting my information from newspapers and magazines rather than from the internet. Crazy, right?

There will always be a tantalizing glow that surrounds the past but, even without the threat of omnivorous creatures from beyond space and time, it's dangerous to linger in that beckoning light for too long.
Posted by Jeff Allard at 10:51 AM

Email ThisBlogThis!Share to TwitterShare to FacebookShare to Pinterest
Labels: The Langoliers

I'm a very nostalgic person, so I constantly bemoan the present for not living up to the past. It's a dangerous practice, to be sure. I've never seen The Langoliers. Y'know, you'd think that more movies would feature Bronson Pinchot and badly rendered CGI popcorn balls.

I know! But maybe one was all the universe could handle.