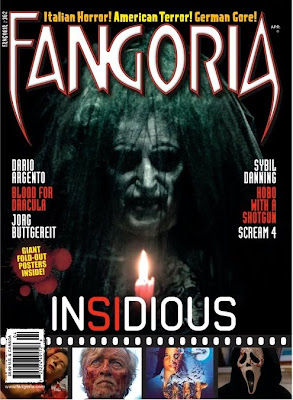 In Fangoria #293, when Chris Alexander stepped into the role of Fango's first new editor-in-chief in over twenty years, the changes were slight (new columns, like Trash Compactor, Sound Shock, and Monster of the Month, made their debut) but they were enough to indicate that a new sensibility was at the helm. Over the course of the next few issues, the new direction became bolder, more solidified. But #298, with its illustrated, Famous Monsters-flavored Gene Simmons cover, is when the new era of Fango really started to feel like an official new era. 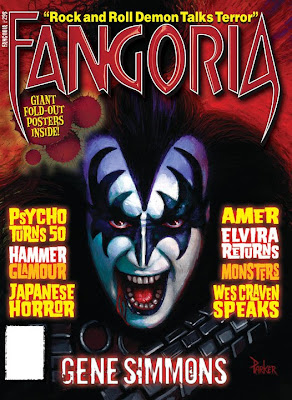 Whereas the first few issues of Alexander's reign were generally in step with what was expected from Fango, issue #298 was an issue that never would've occurred under the stewardship of former E-I-C's Tony Timpone or Bob Martin. #298 is where Alexander really started to make Fango fully his own - while still showing reverence for the mag's traditions.

After several issues of experimenting with the cover design, issue #299 settled on the perfect combo of new and old. The new logo won out over the classic Fango font but the much-missed filmstrip was finally back. And again, #299's striking cover choice of Black Swan showed a willingness to go where Fango wouldn't have gone before (they would've covered the movie, surely, but not made it the main cover feature). 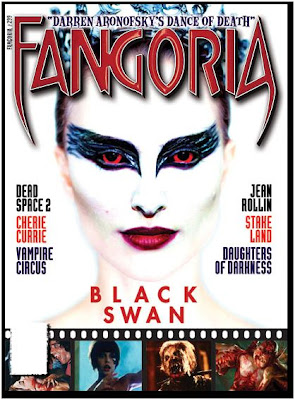 Since the subsequent celebratory installment of #300, two new issues have been published and having just had the time to catch up on #301 and #302 back to back, I have to say it's amazing what a different mag Fango has become. Fango was never less than a polished production but in recent years its format had begun to feel calcified. What Alexander has brought to the mag - besides the kind of enthusiasm that only someone newly taking the reins could have - is a natural eclecticism and a willingness to throw the readership some curves. The old Fango standbys are still in place - Monster Invasion, Dr. Cylclops, Nightmare Library (even the M.I.A. Postal Zone has returned, along with a revivied version of The Pit and the Pen) - but there's an unmistakably personal stamp on the magazine that there hasn't been in awhile.

The strength of the Timpone era was that it refined what had been established previously by Bob Martin and Dave Everitt and took it to the next level. Under Timpone, Fango wasn't as quirky as it had been in its earliest years (no more articles on horror in wrestling, for example) but it was like the difference between Ditko's Spider-Man and Romita Sr.'s Spider-Man - both great runs but one more idiocyncratic and the other much slicker and with broader appeal. But while Timpone's approach had carried the mag through many eras of horror, the time had come for Fango to be a more unpredictable, more offbeat publication again and Alexander has delivered that.

From a reader standpoint, the biggest problem Fango faced pre-Alexander is that it had become easy to take for granted. As the senior horror mag on the stands, it often felt as though it was creatively lagging behind younger competitors like Rue Morgue and Horror Hound. That's not the case anymore. In #302 alone (whose cover appears at the top of this post), alongside coverage of Scream 4 and Insidious are looks at Hobo with a Shotgun and Rubber, an interview (begun in #301) with Wolfen director Michael Wadleigh, interviews with pioneers of German splatter like Violent Shit director Andreas Schnaas and Nekromantik's Jorg Buttgereit, an interview with exploitation queen Sybil Danning, Luigi Cozzi interviewing Dario Argento, the first installment of an ongoing short fiction feature, and a pull-out poster reproduction of the original US Deep Red poster. It's a hell of an issue.

If you're not reading Fango, you're missing out on the best horror mag on the stands. And if you haven't sampled Fango lately, next issue's incredible cover ought to convince even the most stubborn hold-outs to give it a try: 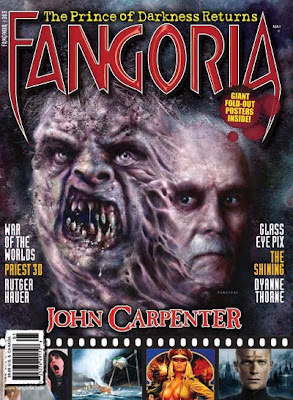 Really perceptive piece on the changes at Fango.

I don't think fiction belongs in Fango, tho. I'd be happy to see a fiction-focused mag by the same publisher, though.

I agree - although it's a hard market these days to sustain a fiction-based mag. Even back in better times for print publications, a great mag like Twilight Zone couldn't make it past a few years.

I'm not sure if Fango is the best place to showcase fiction (GoreZone tried to make a go of it with short stories and it seemed a little awkward there, too) but they've wisely limited it to just one page and I admire the attempt to mix things up a bit.

Great summation of the magazine's recent transformation, Jeff. As a lifelong fan who can still remember purchasing the very first issue in my neighborhood comic books shop, I'm thrilled by Alexander's infusion of the literary in the magazine. The increased focus on books and writers has been most welcome. Still hoping they'll expand their current book review section by a few reviews, but no complaints from me.

We actually invited FANGORIA to play a major role in the HWA's upcoming Stoker Weekend convention in June, and although there was some initial enthusiastic interest, their participation seems unlikely. Was hoping to get them to really solidify their commitment to the horror literature scene with some presence at the highest-visibility conference for horror writers and to cover the 24th Annual Bram Stoker Awards. Especially disappointing in light of the fact that we're honoring former longtime editor Timpone as a Guest of Honor.

Missed opportunities aside, I think Alexander and team are doing a bang-up job! Again, great piece!

Thanks Vince - sorry to hear Fango probably won't participate in the Stoker Weekend con but it's nice to hear that Tony Timpone will be a Guest of Honor. Tony was always a gracious, enthusiastic presence at the Fango cons and when I sent him a copy of my first fanzine back in the day, he sent back a great note of encouragement. I'm sorry he isn't at the helm of Fango anymore but at the same time, it's obvious that they handed the mag to the right guy.