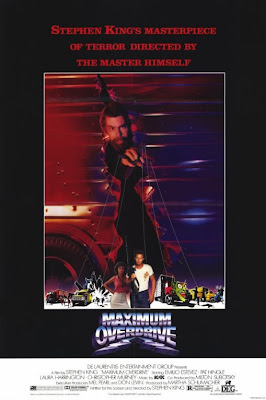 Things started out so well when it came to adapting Stephen King's work from page to film. When your writing is brought to both the big and small screens by the likes of Brian DePalma, Tobe Hooper, Stanley Kubrick, George Romero, David Cronenberg, John Carpenter, and the underrated Lewis Teague, you're talking about some high caliber cinema! But as those early King films came out, save for DePalma's Carrie, they all met with gripes from fans and critics.

Time has been very kind to The Shining, Salem's Lot, The Dead Zone, Creepshow, Cujo and Christine but reactions were initially mixed. And those were the prestige King films - as the '80s wore on, the floodgates were open and many lesser adaptations hit the screen, junk like Children of the Corn and Silver Bullet. The general consensus was that no one was able to do King justice.

Looking back, that doesn't seem to have truly been the case - it was more a case of people being way too hard on mostly solid movies - but in 1986 it didn't seem so outrageous that King himself should be allowed to take a crack at directing his own material. Producer Dino De Laurentiis, who scored a big King win by ushering The Dead Zone to the screen and suffered a couple of misses with Cat's Eye and Silver Bullet offered King the opportunity to get behind the camera and adapt "Trucks," a short story that had appeared in King's 1978 collection Night Shift. 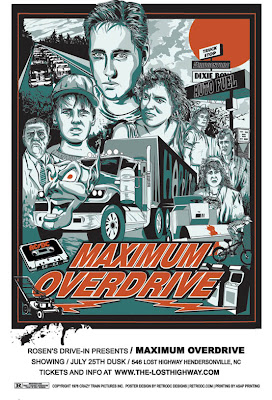 A brief, oddball tale about machinery inexplicably coming to life and subjugating humanity, "Trucks" didn't seem like such a great choice to expand to a full-length film. Unlike, say, "The Body," there wasn't a lot of meat on its bones. More than that, the amount of mayhem required by the story didn't seem like something a first-time director should be taking on. Even an experienced director would've surely run into problems with Maximum Overdrive (by the way, De Laurentiis teamed King with a camera crew that only spoke Italian) - and that's not even taking into account how dirt stupid the material was. Had Maximum Overdrive been the best movie it could've possibly been, it still would've been terrible. To use an apt vehicular analogy, from the start Maximum Overdrive was a car crash waiting to happen. I haven't read much about King's addiction issues, which were reportedly raging in the '80s, but I have to assume that King was at his most coked-out when he willingly signed on to this.

In an interview with Fangoria, King claimed he set out to make a "moron movie." As he went on to say "...they're the best kind of movies as far as I'm concerned. Back to the Future is a moron movie. Rambo is a moron movie. I loved them both." From this quote, it's clear that King was not the right person to direct any movie - whether it be based on his own writing or whether it be the latest installment of the Police Academy saga. The best bad movies are always made by people who tried (and spectacularly failed) to make good ones. Movies that are deliberately dumbed down from the start never work - and the less said about the fact that King considered Back to the Future (a film that boasts a damn sharp screenplay) a "moron movie," the better (even Rambo, with its sleek action and pacing, doesn't deserve that designation). 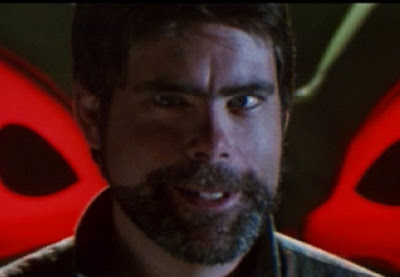 Watching Maximum Overdrive, it's hard to figure out what King's mindset was, outside of just ascribing it to mountains of blow. He may have claimed he wanted to make a moron movie but even given that, it's hard to understand why he decided to stock his film with so many crude, slobbish, screeching caricatures. His fiction is filled with such types but, if anything, King portrayed these characters in even broader terms on film than on the page. His Creepshow character of luckless hayseed Jordy Verill looks like David McCallum's super-evolved Welsh miner from The Outer Limits episode "The Sixth Finger" next to Maximum Overdrive's cast of rednecks.

There are a few noble souls trapped in the besieged Dixie Boy diner, like Emilo Estevez's ex-con turned short order cook and Laura Harrington as a no nonsense, tomboy-ish hitchhiker, but most of the folks that populate the movie are not so endearing - such as Pat Hingle as the oafish owner of the Dixie Boy, Bubba Hendershot. Hingle's character is of a type that reoccurs often in King's fiction - the small time tyrant who gleefully abuses the tiny bit of power they possess - but King lays it on so thick and he seems to have encouraged his cast to play their roles as grotesquely as possible. Yeardley Smith (who would go on to voice Lisa on The Simpsons), whose character of a newly wed bride ought to be sympathetic, spends most of her screentime shrieking like a cat with its tail caught in a garbage disposal and its whiskers in flames. 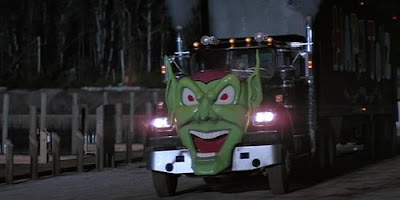 On top of its mostly unpleasant characters, Maximum Overdrive also has no scares to offer. I suspect that a more experienced director could've done a better job of goosing the audience with jump scares, for whatever that's worth, but I doubt that any director could've made such a silly concept unsettling. Watching Dennis Weaver pursued by the unseen driver of a tanker truck in Steven Spielberg's gripping Duel is scary. Watching a group of characters forced to pump gas for a miles-long line of sentient trucks, not so much. And King oddly lets far too many members of his large cast make it to the film's conclusion. For a movie that practically begs to have a double digit body count, nearly the entire group that started off being trapped in the Dixie Boy ultimately make their way to freedom.

King joked upon Maximum Overdrive's release that he made have made the modern equivalent of Plan 9 from Outer Space but unfortunately Maximum Overdrive is too plodding to share that film's entertainment value. King did one thing right with his one and only feature film (well, maybe two if you'd like to say that the Green Goblin truck is kind of cool) and that's having rock gods AC/DC supply the score. It isn't the greatest score, no, but at least hearing the occasional thunderous AC/DC riff helps to fight off the powerful urge to sleep.

In the film's hyperbolic trailer, King spoke directly to the audience, saying that "if you want something done right, you ought to do it yourself" and promising "I'm gonna scare the Hell out of you!" When the final product hit screens in July of '86, it was clear that of all the directors who had attempted to bring King to the screen so far, King himself was arguably the worst - sparing Children of the Corn's inept Fritz Kiersch any further shame. As readers of Fangoria knew, the dreaded MPAA had forced King to excise much of Maximum Overdrive's splatter FX to save it from an 'X' rating - something that diluted his film's impact, King argued - but the truth is no amount of gore would've turned Maximum Overdrive into a good movie.

Every once in awhile I'll forget just how shitty this movie is and want to give it another chance. I always sucker myself in with the thought that this must be a fun, trashy movie - an '80s relic that surely plays better today - but it's so not that. I have such fond memories of looking forward to Maximum Overdrive's release back in the summer of '86 that I keep hoping I'll discover that it's become a true guilty pleasure. Instead, it's about as fun as sucking on exhaust fumes.

I will say this, though - if they ever put out a Maximum Overdrive DVD with King paired with Joe Bob Briggs on a commentary track, I couldn't say no to that.

I've heard of Maximum Overdrive but I never saw it, guess I probably won't ever see it either. I'm glad somebody else agrees that Children of the Corn was no good though. I've heard some people say they didn't enjoy it, but I've heard a good amount of people try to tell me it was a borderline classic. It's disappointing because that story has SO MUCH potential, but the movie is just plain bad.

Children of the Corn is indeed terrible. It's the first horror movie I remember being severely let down by. The TV spots looked so great I couldn't wait for the movie to come out but sadly it was not what I was hoping for. And definitely give Maximum Overdrive a pass - it's not worth your time.

This is a really excellent and honest assessment about this film. Even the most diehard King fan has to admit that this is a big ol' mess of a film that fails to work on pretty much every level. Thankfully, King cleaned up his act and stayed away from the director's chair.

Yes, that was a wise move on his part. King is a brilliant writer but moviemaking is not his forte.

I've always thought this could be a really fun premise for a great splatter movie of sorts.
The funny thing to me is how much is made about King being a lousy director when in fact it's just as much the writing of this movie that makes it suck so bad. For example, there were several large trucks roaming around, why didn't they all just plow into the tiny truck stop? They would mostly retreat anytime someone was able to run inside. Also, from what I can recall, there was a huge arsenal of weaponry in the basement including rocket launchers that they begin using, but then just stop using them?

MAXIMUM OVERDRIVE is best remembered and seen as an example of 80's excess... go into it expecting a comedy, and you'll have a much better time with it. It also helps if there's a good soundsystem - the projectionist just cranked up the AC/DC soundtrack, and Big Dumb Fun was had by all.

This film, along with THE LEGEND OF BILLIE JEAN made Yeardley Smith a cult star.

Yeardley Smith definitely had a little bit of fame before The Simpsons. As for MO, it does work best as a comedy but the biggest problem is that the pace is so slack. After the first few scenes, the movie kind of stalls out and it becomes a movie about trucks driving in circles. Maybe it would've been better if the band of survivors had made a break for it earlier and we could've seen a little more of the big picture.

My friends and I would mock the Stephen King trailer for MO, pinching our noses to imitate King's voice and over-dramatically declare, "I'm gonna scare the hell out of you!"

Come to think of it, pinching our noses was probably the appropriate reaction once I finally MO. Pee-you.

Wasn't there a TV movie based on "Trucks" about ten years ago? Starred Timothy Busfield?