The Thing Before The Thing 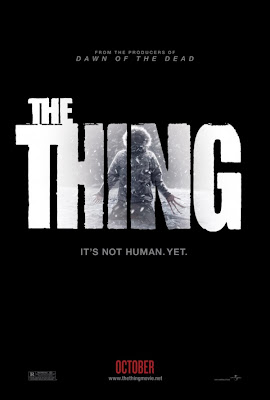 Months after the production had vanished off the radar to the point where I was beginning to wonder whether the movie would make its October release date, on the heels of the appearance of the teaser poster the first trailer for the prequel to John Carpenter's The Thing has made its way online and at first glance, I like what I see. At the very least, there's nothing in this trailer that sets off any red flags.

It's appropriately moody, the paranoia is in play, there's plenty of beards to go around, and it looks like attention is being paid to detail - just from this trailer it's clear that this is going to dovetail nicely with what we learned in Carpenter's film about the Norwegian camp.

In case you haven't already watched the trailer, take a look:

There's a glimpse of CG in this trailer but I also see some practical stuff so I hope that this movie will have a mix of both, but favoring practical as much as possible.

Having been too young to see Carpenter's Thing in theaters, I welcome the chance to see a respectful approximation of it on the big screen (especially if they slip in some of Ennio Morricone's soundtrack). And it's interesting that it's getting an October release rather than the summer one that doomed the original. In John Carpenter: The Prince of Darkness by Gilles Boulenger, Carpenter described how leery he was about The Thing's release date:

"What I could percieve before The Thing was released was that the audience was not interested. I was sitting in my office at Universal a few weeks before the movie came out, and I got to read a little study, a demographic study - it was the first time I ever saw one of these things - and they discovered that the market for horror movies had shrunk by 70% over like six months. Since we were making this movie for over a year, I really did not know what we were going to do. The people clearly did not want to see that type of movie anymore and I forgot why. So I went to Bob Rehme, head of marketing at Universal at the time, and I said to him, "Because of the way things are going, I think you should hold this movie back from the summertime, release it at Halloween, and retitle it Who Goes There? Don't put The Thing on it, I have a funny feeling."

Sadly, history proved Carpenter's "funny feeling" to be dead on. Only time will tell whether the prequel will fare any better. All I can say at this early point is that while this new Thing looks worth believing in, appearances can be decieving. Or, to borrow the watchful words found in a poster seen on the walls of the original's rec center, "They Aren't Labeled, Chum!"
Posted by Jeff Allard at 5:38 PM

I think this looks pretty amazing, but is that a 13-year-old lady scientist?!

I loathe prequels, but the THING '11 trailer has me...not as cynical as I thought I'd be?

Will, she does look young, doesn't she? FF, I'm sure some people will greet this trailer with their arms angrily crossed but I'm good with it. Good enough to wait until I see the movie to reserve judgement, at least.