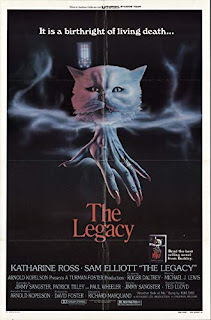 It's that time of year again! Time to blow the accumulated dust off this blog and celebrate the season, Trick or Trailers style! I did think about letting it go this year but, you know, some traditions shouldn't be allowed to die!

I've been doing this yearly column so long that, honestly, I can't remember which movies I've already gotten to by now but I have a feeling I haven't covered 1978's The Legacy yet so I'm going with it!

While the '70s are known for the iconic likes of Halloween, The Exorcist, The Hills Have Eyes, The Omen, The Texas Chain Saw Massacre, Alien, and other mainstays of the genre, as a kid in the '70s, my perception of the decade's horror offerings was very different. For me, all the classics I just mentioned were completely out of reach. Thanks to a protective mother, I wasn't even able to see Jaws!

My horror diet in the '70s was very much PG and G-rated, and was mostly limited to whatever aired on commercial television. That's fine by me because just keeping things on that level was enough to have me frequently scared shitless.

In my child's eye view of '70s horror, the decade's heavy hitters weren't John Carpenter or George Romero, they were Bert I. Gordon and whatever dude directed The Car.

I wasn't an educated consumer back then, let's say. I couldn't differentiate between movies on grounds of their likely quality, which was actually nice. For me, going by TV spots and newspaper ads and not being old enough to read or care about reviews yet, something like Halloween was on the same playing field as Kingdom of the Spiders and held equal weight. A scary movie was just a scary movie.

So the fact that The Legacy was actually regarded as being pretty lame didn't register with me at all as a kid. All I knew was that the commercials freaked me out. So when the opportunity came to check out The Legacy when it came to TV a couple of years later when it premiered on The ABC Friday Night Movie, I was stoked, believe me.

The Legacy definitely lived up to my expectations with an eerie premise and some big scares (the scene where a swimmer dies in an indoor swimming pool when the surface of the water inexplicably turns solid terrified me). As far as I was concerned, it was as good a horror movie as I'd ever seen. That it was already a half-forgotten piece of schlock by the time I watched it would have been news to me.

In our internet age, where every place you look someone is slagging something that someone else loves, I wonder if people can still have that innocent time in their life when it comes to movies anymore. I hope so. To have those simpler times to bond with films without picking them to pieces is where a love of movies is able to take root.

Once it does, all the cynicism that comes later can't pull that loose. 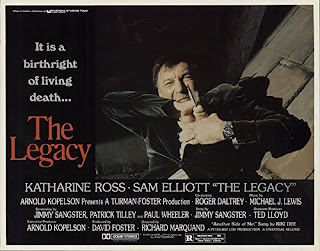 Glad to see you back Mr. Allard. Felt a little nostalgic so I decided to drop by and check out the archives. Nice to see some new seasonal content.

Pleasantly suprised on this cold and rainy October...

Hey Jose, thanks for stopping by!