Carrying A Torch For Charlton Heston 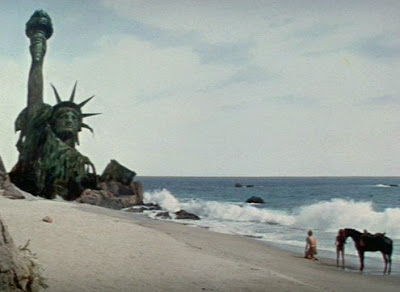 The fact that despite his large filmography my enduring impression of Charlton Heston lies almost exclusively with his run of post-apocalyptic sci-fi films of the late '60s/early '70s - Planet of the Apes, Beneath the Planet of the Apes, and Soylent Green - makes me feel inadequate in trying to address the scope of his professional accomplishments. After all, these films are still considered camp in some quarters. But they shook me as a child and Heston's portrayal of Taylor in the first two Ape films remains an indelible touchstone for me.
In 1968's Planet of the Apes, Taylor is a hardcore, out-for-himself cynic, roaring with derisive laughter as one of his fellow crew mates stops to mount a tiny US flag among a pile of stones shortly after their crash landing on what they assume is an alien planet. Taylor doesn't believe in carrying the banner of his country out to the stars. Putting the flag of our country on the lonely ground of this far-flung, barren land? Who could possibly benefit from such a gesture?
And when the dominant species of this unknown, "upside down" planet puts his very right to exist in question, he vaults over every ordeal with dogged determination. No matter how backwards this planet may be, he means to survive it. He gives as good as he gets - and then some - to Dr. Zaius and also scores himself a gorgeous companion to ride off with. As one ape admiringly says of Taylor's winning ways, "Not bad - for a human." But when the other shoe falls in the last scene of POTA, it literally brings Taylor to his knees.
The way this final scene plays out, and Heston's performance, still gives me chills - no matter how many times it's been sent-up and parodied elsewhere in the forty years since. When he cries out "You maniacs!" in front of the ruined, half-buried Statue of Liberty, it's the agony of a man betrayed. As much as Taylor may have scoffed at his crew mates' naivete, to see that the world he left behind had squandered its own future confirms his own cynicism in the most awful possible way. It not only confirms it, but coldly trumps it.
And although Heston's screentime in the second chapter of the Ape saga, 1970's Beneath the Planet of the Apes, is limited, he makes his scenes count. As a kid, I found the scarred faces of the psychic subterranean mutants in this sequel to be pretty alarming but not as alarming as the fact that a dying Taylor - fatally wounded after being machine gunned by gorillas - uses his last gesture to destroy the entire planet by setting off an atomic bomb (as a side note, I'd just like to mention that this little love letter was originally rated 'G'!).
When Beneath the Planet of the Apes closed on the astonishing sight of the Earth being obliterated ("a green and insignificant planet is now dead"), I was stunned. This was very a heavy conclusion for a kid to process. Before seeing Beneath the Planet of the Apes, I never considered the idea of the world coming to an end, even in the very far future. After seeing this film, though, Charlton Heston would be irrevocably joined hand in hand with the Apocalypse in my mind. And that's a very profound association to have.
Even from the opening of Planet of the Apes, as Taylor records his final thoughts before being the last of his crew to enter cryogenic sleep ("...One more thing - if anybody's listening, that is. Nothing scientific. It's purely personal. But seen from out here everything seems different. Time bends. Space is boundless. It squashes a man's ego. I feel lonely."), I've always felt as though I had to credit Heston with introducing me to my first existential thoughts.
There's many great performances from Mr. Heston that I've sadly never taken the time to expose myself to. Maybe I will make the effort to seek out films like Will Penny one day. And maybe then I'll have a more informed appreciation for his abilities as an actor. But for now, I can only say that the first film that introduced me to Charlton Heston instantly made him every bit as iconic to me as the Statue he famously kneels before.
Posted by Jeff Allard at 7:00 PM

Email ThisBlogThis!Share to TwitterShare to FacebookShare to Pinterest
Labels: Charlton Heston, Planet of the Apes