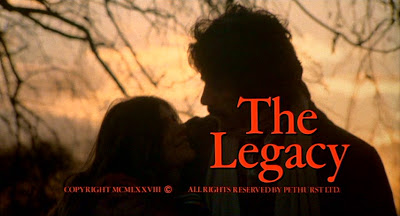 In 1978, a new era in horror was ushered in thanks to two trend-setting classics - Halloween and Dawn of the Dead. But while those and several other films from that year (such as Philip Kaufman's incisive Me Decade Invasion of the Body Snatchers remake and Joe Dante's spirited Jaws rip-off Piranha) went on to enjoy lasting legacies among horror fans, a genre picture from 1978 that ironically found itself forgotten almost immediately upon its release is a film titled The Legacy.
First of all, when a horror movie sports a mellow ballad sung by Kiki Dee (a singer who achieved her greatest fame with the Elton John duet “Don’t Go Breaking My Heart”) as its theme song, it’s inevitably going to have a hard time going head to head with the kind of landmark horror efforts that 1978 was famous for. And yet, whenever I hear Dee’s soothing vocal on “Another Side of Me” at the start of The Legacy, it instantly transports me back to a blissful, earlier time.
1978 was still a few years too soon for me to be seeing R-rated horror movies in the theaters so my first viewing of The Legacy came courtesy of The ABC Friday Night Movie (I’m guessing that The Legacy would’ve had its TV premiere by ’80 or '81). Young horror fans raised in an era of cable and home video probably can't imagine having to wait as long as a few years after a film’s theatrical release to finally see it in their homes – and then to have to watch an edited version complete with commercial interruptions – but The ABC Friday Night Movie (which aired from '75 to '83) was where I first saw many of my favorite horror films from the late ‘70s/early ‘80s like the '78 Invasion of the Body Snatchers, the '77 Island of Dr. Moreau, Kingdom of the Spiders, Coma, The Shining, The Car and The Fog - and all of them fueled my burgeoning horror fandom.

Before having the privilege of seeing these semi-recent films, my primary exposure to horror movies was with the older classics that ran on The 4 O’Clock Movie, Monday-Friday as part of Connecticut-based Channel 30's station library. Those movies instilled a lasting love of horror in me but it was The ABC Friday Night Movie that allowed me to feel like I was starting to catch up with the times.
Thanks to my mother not being willing to (or not having the extra cash to) purchase genre magazines like Fangoria or Starlog which covered the current genre scene, I knew very little about The Legacy or any other contemporary horror films (I don't remember my mother having a newspaper subscription when I was younger either - so reviews were out, too). Any reading involving horror movies was limited to whatever books were available at the school or local library and those usually stopped short of offering any info on movies later than the early '60s - so learning about recent films wasn't easy. For me, with so little hard info to go on, The Legacy had every chance to be as good as a movie like, say, The Shining. I had almost no notion back then on what newer horror films had to offer.

In The Legacy (scripted by Hammer vet Jimmy Sangster and directed by Richard Marquand, who would go on to helm Return of the Jedi), Katherine Ross and Sam Elliot play a couple who travel to England for a high-paying interior decorating gig. Once there, they’re involved in a rural motorcycle accident and while they wait for the needed repairs, they become guests at a strange gathering within the walls of the wealthy estate of Jason Mountolive (John Standing). Other guests arrive during their stay (including Rocky Horror Picture Show's Charles Gray and The Who's Roger Daltry) and it soon becomes apparent that something deeply sinister is taking place. All the other guests have achieved impossible wealth in their own various fields, they seem to all belong to some sort of secret order, and when Ross and Elliot repeatedly try to leave the estate, something always keeps the pair from escaping.

On top of that, these well-to-do guests on the estate grounds are being killed off one by one in events that look like accidents but are really (surprise!) the handiwork of malevolent supernatural forces. What is Ross’ connection with these people and why does her destiny seem tied both to this estate and with the incredibly ancient and putrefying form that lingers behind the drapes of a hospital bed in a specialized chamber? All those questions and and more are answered (not answered well, perhaps, but answers are still provided) before the credits roll on The Legacy.

To watch The Legacy now only prompts me to wonder what about it originally held my interest. Even though characters are being bumped off steadily throughout the course of the film, outside of a young woman swimming in an indoor pool who suddenly finds that the entire surface of the water has inexplicably turned solid – forcing her to stay under and drown – none of the character deaths in The Legacy deliver the kind of ghoulish, gut-grabbing flourishes that '70s audiences who had already made the spectacular Omen films into hits would've expected (Damien: Omen 2 was released earlier in '78).
Ultimately, The Legacy is just bland and most of the film's suspense involves Ross and Elliot’s stymied attempts to escape the grounds of the estate. And there's a bizarre happy ending as well where Ross inherits satanic powers but both she and Elliot seem to regard this development as just another of life's curious adventures.
For all its shortcomings, I can’t deny that The Legacy left a lasting mark on me. Until now, though, I found myself having a hard time saying why. But then I realized that about a year or so after seeing The Legacy was when my eyes became newly opened to the splatter era and I became a regular reader of Fangoria as well. Almost overnight I hit adolescence and became a gorehound. And as I look around my house now at the scattered discs and screeners readily available to watch - titles that proudly push the boundaries of cinematic violence like Inside, Frontière(s) and Mother of Tears, the simple reason finally dawned on me why The Legacy still lingers on in my imagination:
It reminds me of a time - the last time in my life - when I needed so little horror from my horror movies.
Posted by Jeff Allard at 11:00 AM

Email ThisBlogThis!Share to TwitterShare to FacebookShare to Pinterest
Labels: The Legacy

Hey Jeff, great blog -- as a fellow '80s adolescent horror buff, this stuff is right up my alley.

I came across your post on The Legacy while trying to locate images/video to support a Tramafession I was emailing to the crew at Kindertrauma. I'll definitely be back to get me some more of "Max!"