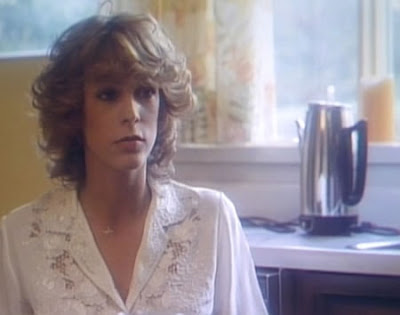 Towards the end of the new Prom Night (yes, it was lousy, by the way), lead actress Brittany Snow evades her psycho-stalker in the manner that made original Prom Night star Jamie Lee Curtis a Scream Queen during her horror heyday. But while watching the new film's endgame play out, something that I never consciously noticed about the original Prom Night finally came to my attention.

And I’m probably the last person in the world to pick up on this so forgive me if this is nothing but a “duh” moment for everyone else but as I watched Snow’s character going through the familiar motions of the Final Girl, alternately eluding and striking back at her pursuer in the kind of tense climatic face off that Jamie Lee earned her place in horror history with, I realized that Jamie Lee’s Prom Night character was never in any jeopardy in that film.

As Kim Hammond, Jamie Lee has nothing to do for the duration of Prom Night but be the best disco queen that Hamilton High has ever seen. While her classmates are being taunted, harassed, stalked, and slaughtered, Kim herself is never a potential victim (actress Anne-Marie Martin as Wendy earns the longest chase scene between herself and the killer and even though Wendy fails to survive, this sequence is the kind of lengthy pursuit that in most slasher films would've been earmarked as the heroine’s Big Moment).

It isn’t until Kim’s ax-wielding brother Alex brings his slaughtering ways onto the flashing lights of the dance floor in the last ten minutes or so of Prom Night that she’s even aware that there’s a killer on the loose. And even then, it’s her date Nick who’s in direct danger, not her.

This made me wonder for a moment why Prom Night's producers even bothered to cast Jamie Lee in the first place but I believe that with any other actress it would’ve been too apparent just how little this character had to do with the events of the film for an audience to perceive them as being the lead.
In 1980, though, Jamie Lee had the horror movie crown long before she got to the Prom. It only makes sense that after Halloween that she could literally dance her way through the role of a horror heroine.
Posted by Jeff Allard at 8:37 AM