Dancing In The Moonlight 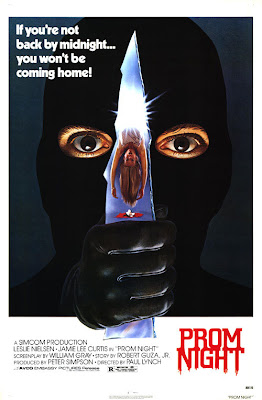 There's a number of early '80s slasher movies that were initially trashed by both fans and critics that hold up well today as being much better films than they were originally given credit for. Films like Terror Train, Hell Night, House on Sorority Row, The Funhouse, and My Bloody Valentine may not be legitimate 'classics' outside of their sub-genre but they all have some actual merit. And for years - up until this very day, in fact - I always thought director Paul Lynch's Prom Night belonged in that company, too. But a fresh viewing instigated by the current remake has forever cured me of that delusion. As far as I'm concerned, Hamilton High's Class of 1980 has a lot to answer for.

Hello. This post is likeable, and your blog is very interesting, congratulations :-). I will add in my blogroll =). If possible gives a last there on my blog, it is about the Celular, I hope you enjoy. The address is http://telefone-celular-brasil.blogspot.com. A hug.

I guess I still have a little nostalgic love for this movie, although I can't defend it too much. Aside from being the last teen culture movie before MTV, this is also the last time Leslie Neilsen could walk onscreen without generating instant laughter.

Yeah Bob, I have a lot of affection for Prom Night too. Or at least I did until I finally watched it again! And you're right about Neilsen. I this movie and Creepshow were the last two movies that put him in any kind of a dramatic role.