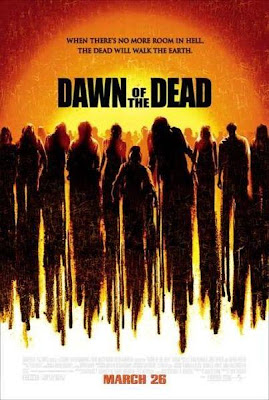 When director Zack Synder's reimagining of George Romero's watershed zombie epic Dawn of the Dead (1978) was announced, no amount of outrage in the horror community was spared. How could Romero's independent, unrated splatter classic (this was the very film, in fact, that Romero coined the term 'splatter movie' for) possibly be translated into an R-rated studio film? Even worse, this atrocity was going to be helmed by a music video director who had never directed a feature film - and it was scripted by James Gunn, who at the time was known mostly as the writer from the godawful live-action Scooby-Doo. If there was ever a film that had fandom united in anticipation of impending suckitude, the Dawn of the Dead remake was it. To call it a hard sell to the horror crowd doesn't even cover the amount of animosity that Dawn of the Dead '04 had to overcome.

And that's why this trailer is one of the all-time greats - because it immediately turned the tide of opinion on this movie. What had been the target of nothing but 'fuck this movie' diatribes suddenly was looking pretty sweet. Whether Dawn of the Dead '04 is the greatest zombie movie ever is debatable (it's not, but feel free to debate it) but no zombie movie has ever had a more bad-ass trailer.

Email ThisBlogThis!Share to TwitterShare to FacebookShare to Pinterest
Labels: Dawn of the Dead 2004, Trick Or Trailers, Zack Synder

When DOTD came out in '04, I was assistant managing at a movie theater. We had a projectionist who wasn't exactly the sharpest knife in the drawer; one night he threaded up every movie incorrectly and wound up leaving deep scratches in all the theater's prints. So we told him, "Hey, Rory, customers are saying there's a problem with the DOTD trailer - wanna go take a look at it?" When that phony film melt occurs, man, you shoulda seen him book it for the projection booth! Cruel? A little. Funny? A lot.

Ha! Great story! Never pass up a chance to send someone running in a panic.