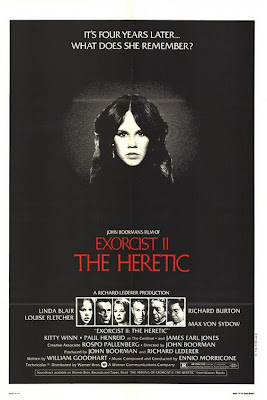 I know The Exorcist (1973) was a tough act to follow, but few filmmakers have torched expectations like the makers of the ludicrous, self-serious Exorcist II: The Heretic did. Maybe it's best to blame the debacle of Exorcist II on the excesses of the '70s. Director John Boorman and his co-writer Rospo Pallenberg (credited as 'creative associate,' Boorman brought Pallenberg on after original Exorcist II screenwriter William Goodhart refused to make the changes to the script that Boorman wanted) must've been high on something more than just their own egos if they thought their film was going to satisfy audiences. If nothing else, only in the '70s would a production of such importance to a studio balloon into a film so strange, inept and willfully difficult without someone writing the checks getting wise to the fact that they were funding a disaster.

But at least Exorcist II is terrible in an ambitious way. It's a mess but it's the kind of mess that would never be made today and that's both good and bad. On the one hand, it's a dick move to fuck with the audience by giving them a self-indulgent head-trip (and a bad self-indulgent head-trip at that) when they're paying good money to see a scary movie. On the other hand, if you're going to fail, fail big, and that's something that's rarely allowed to happen in these safe times.

Every time I watch the trailer for Exorcist II: The Heretic, I become convinced that there must be an amazing movie in there someplace (how can it not be a party with all those swarming locusts?). I haven't watched it in years but I'm thinking that maybe I ought to make the time. This trailer's got a great beat, and you can dance to it.

Almost as great as the trailer is Exorcist II's teaser. Love the use of still photographs here:

Email ThisBlogThis!Share to TwitterShare to FacebookShare to Pinterest
Labels: Exorcist II: The Heretic, Trick Or Trailers

I haven't seen this in years either, Jeff. I just remember it being so wrongheaded, but so compulsively watchable. And that cast! Poor Richard Burton, who was just careening from trash to treasure at this point in his career...

Even the Morricone score is light years removed from Oldfield's work, so eclectic, such a head trip. In college I was always finding music for the modern dance department - they put my cassette tape of the soundtrack to use again and again, and I never got it back. Damn. And yes, they used that track you hear in the trailer for a very bizarre piece for 13 female dancers. Your off-handed joke is right on the money, Jeff!

Ha, that's one dance number I would love to see! Morricone's score is so wild - I don't even remember if 'Tubular Bells' was revisited at all during Heretic but it seems unbelievable that they wouldn't use any trace of that distinctive score in the sequel.

I gotta' say, that trailer is doing it's job. I absolutely want to see this now.

Yeah, I can only imagine how that trailer was recieved in theaters - I would've gone crazy if I saw it for the first time on the big screen!

Just wanted to take a second and thank you for all the effort you put into your countdown this year. Happy Halloween!

Thanks, Shawn - glad you enjoyed it! Have a Happy Halloween!

THE HERETIC is worth a rewatch, but it's more successful if you put all thoughts of Friedkin's EXORCIST out of your mind and approach it on its own terms.