The Little Girl Who Lives Down The Lane 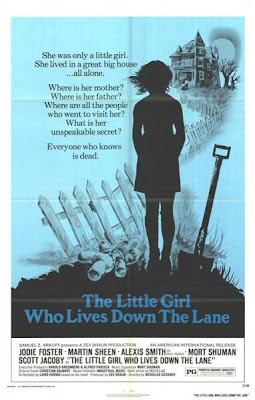 Advertised as a suspense thriller for its Psycho-esque storyline involving a troubled protagonist resorting to murder to hide the truth about a deceased family member (as the poster read: "What is her unspeakable secret? Everyone who knows is dead."), The Little Girl Who Lives Down the Lane (1976) is a dramatically different genre entry that generates much of its quirky appeal by making its teenaged heroine capable of murder but smart and sympathetic rather than disturbed and ghoulish. With a screenplay by Laird Koenig adapted from his own 1974 novel, The Little Girl Who Lives Down The Lane remains a sensitive and unusual character study.

As the eponymous 'little girl', thirteen-year-old Rynn Jacobs (Jodie Foster, in her first leading role) lives in a seaside home with her father, a well-known poet and the two zealously guard their privacy. But that privacy is at risk due to their prying landlord, Mrs. Hallet (Alexis Smith), who constantly comes by unannounced. After butting heads with the willful Rynn, Mrs. Hallet insists on speaking to Rynn's father. But what we know from early on is that Rynn's dad is not on a business trip and he's not working in his study - instead he's been deceased for some time, having committed suicide after being diagnosed with cancer.

Prior to his death, he and Rynn planned for her to keep up the pretense that he was alive so she could live independently. That means dealing with her estranged mother should she ever appear and whenever visitors come calling - everyone from Mrs. Hallet to her adult son Frank (played by Martin Sheen), to the local law (Officer Miglioriti, played by Mort Shuman) - Rynn has to hustle to keep up the illusion of her father's presence.

This complicated ruse is too much for one girl to handle, though, and circumstances drive her to confide in a neighborhood boy, named Mario (Scott Jacoby, who starred several years earlier as a disturbed teen who secretly lives in the walls of a family's home in the 1974 TV movie Bad Ronald). Mario not only helps Rynn maintain the appearance of her father's existence, he also tries to protect her from the advances of the landlord's son, a pedophile with designs on Rynn.

The bond between Mario - who bears his own cross as a cripple due to a childhood bout with polio - and the precocious but also vulnerable Rynn makes for a genuinely touching relationship. Director Nicholas Gessner fails to make much of the film's thriller elements (there's several opportunities for suspense that he never works to their best advantage) but he elicits a range of strong performances that illuminate Koenig's subtle screenplay.

One of the most satisfying aspects of Koenig's script is that he lets Rynn be a fallible character and shows that there's limits to her ingenuity. As smart as she is, she's still a kid and Koenig wisely doesn't forget that. Rynn makes mistakes and her attempts to cover up the absence of her father are not always smooth. Koenig always reminds us of Rynn's intelligence but her Achilles Heel is that she is only thirteen and lacks experience. Not just with the adult world but also with her own emotions - we can see how blindsided she is by the way she feels about Mario.

Based on the creepy preview that ran before the film when I first saw this as a kid on The ABC Friday Night Movie, I was expecting two hours of thrills and chills. But the only act of unsettling physical violence involves some vicious harm to a pet hamster. Oh, and there's also a cellar hatch door that comes down pretty hard on one character's head. And that's about it. But yet this movie, and primarily its unsentimentalized tale of first love between Rynn and Mario, riveted me. There's no final twist to turn the movie on its head and the climax is no more than two people drinking tea. Yet Rynn is such a well-rendered heroine that the movie succeeds as a character piece.
To be a kid but to also be independent, Rynn's situation seems to be a case of pure wish-fulfillment (it's appropriate that this movie's biggest following is found among Gen-Xers - the first generation of so-called 'latch-key' kids) and her bravado is attractive. But as The Little Girl Who Lives Down The Lane comes to an emotionally ambiguous end, the irony is that while Rynn has kept her freedom, her haunted eyes question how much more freedom she can endure.
Posted by Jeff Allard at 7:09 PM

Email ThisBlogThis!Share to TwitterShare to FacebookShare to Pinterest
Labels: Jodie Foster, The Little Girl Who Lives Down the Lane

I just recently watched this on DVD, and while I felt it was far from perfect, it's very much an affecting film.

This is definitely a film that I saw at the right age for it to have the maximum impact (I was probably nine or ten). I think I still would've admired it had I seen it later in life but it wouldn't have left nearly the same mark on me.

This movie really intrigued me as a kid... and still does. I think it was the beginning of my long standing crush on Jodie Foster.

Have you ever seen 'Our Mother's House'? a 1967 British film I saw recently that reminded me A LOT of 'Little Girl'... except that it's a whole family of children...

I've never seen 'Our Mother's House' - it sounds interesting, though! And I have to say that I first developed a crush on Foster after seeing her in Disney's Candleshoe (1977). Seeing her in TLGWLDTL on TV soon after that (at least in my memory it seems like it was soon after that - I can't be sure, though) was a one-two punch that put my crush totally over the top.

This movie had a huge impact on me and I really love the book too. I think Rynn is the coolest and no offense to my parents but I really coveted her solitude. Mrs. Hallet still gets me seeing red too! Oh, the world is just chuck full of Mrs. Hallets isn't it? I think this movie does suffer from the expectations the poster and video box set but I saw it first on T.V and had no idea what to expect. I can hear her Dalek voice right now "MY HOUSE, MY HOUSE!"-UNK