Terror in the Aisles 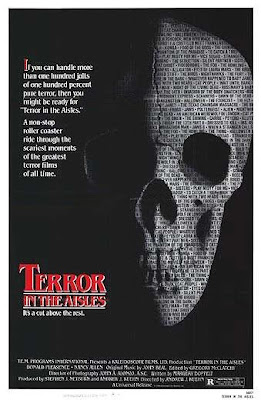 It's hard to imagine that a film comprised entirely of clips from other movies would be granted a wide theatrical release but that's the case with 1984's feature-length compilation of horror and thriller highlights (hosted by Donald Pleasence and Nancy Allen), Terror in the Aisles. Presented as an overview of fear on film with an emphasis on modern terrors, Terror in the Aisles (directed by Andrew J. Kuehn and written by Margaret Doppelt - who's responsible for penning such insightful lines as "perhaps we invent artificial horrors to help us cope with the real ones") is at best a scattershot affair that lacks any kind of focus or insight. But yet for fans of a certain age, it remains a fondly remembered snapshot of a past era.

Younger genre fans who have - thanks to the advent of home video, DVD, and the internet - always enjoyed near-instant access to virtually the entire history of film might wonder how a film like Terror in the Aisles could ever be regarded as useful. But at one time even a poorly put-together compilation like this served a valuable function. Before almost every film was readily available on VHS (and before VCRs themselves were a common part of every household), Terror in the Aisles was an HBO staple and it provided many young horror fans an initial glimpse of films that remained out of their reach.
And as Terror in the Aisles didn't specifically note where each of its clips originated from, novice viewers were left to puzzle out for themselves what many of these films were. And even if they had the ability to identify which clips belonged to such lesser-known titles as Alone in the Dark and Ms. 45, it was unlikely that kids would have the immediate opportunity to see the complete films themselves.
Even if the presentation was lacking (the film leaps from one montage to the next with no rhyme or reason, making a series of unrelated points - People love villains! Hitchcock was the Master of Suspense! Crazy horror audiences talk back to the screen!), these clips still offered younger horror fans an intriguing taste of films that were largely unavailable to them. If only Terror in the Aisles had been assembled with a sharper eye towards the genre and had spent less time dwelling on thrillers like Nighthawks, Marathon Man, Klute, and Vice Squad (all great movies - but not horror).
Still, just for its host segments with Pleasence and Allen - who deliver their narration while sitting in a theater watching a film along with an audience that would give the seediest 42nd Street crew a run for their money (my favorite audience member is the fat Hispanic dude with the bandanna) - it's easy to harbor plenty of affection for Terror in the Aisles. With these host segments, it's clear that the makers of this film were out to caution viewers about the possibility of some real terror in the aisles as they portray the horror audience as being far scarier than the actual movies with narration that delivers digs like "There's no question about it - some terror films go too far. But so do the audiences." The irony is that as intimidating as the audience in Terror in the Aisles is supposed to be, they seem normal compared to Donald Pleasance. No matter how many thugs, stoners, and prospective serial killers they place around him, Pleasence is always more alarming than they are, blurting out lines like "It's only a movie!" at random junctures. Terror in the Aisles proves that Pleasance couldn't even host a compilation of clips without chewing the scenery and that alone makes it awesome.
The posters for Terror in the Aisles read "If you can handle more than one hundred jolts of one hundred percent pure terror, then you might be ready for Terror in the Aisles." but while that promised a film aimed at the advanced horror fanatic, Terror in the Aisles was more like a set of training wheels for those fans just learning how to get up to speed.
Posted by Jeff Allard at 10:53 AM

Email ThisBlogThis!Share to TwitterShare to FacebookShare to Pinterest
Labels: Terror in the Aisles

Thanks for this posting. I have not thought of this movie in years. I saw it at a theater back in the day.

If memory serves, don't they even throw in the fireworks scene from It Takes a Thief?

Hmm. Not that I recall. But either I may have overlooked it or it may be in the TV edit of the film, which replaced a lot of the R-rated footage with more general audience material.

Yeah, Terror in the Aisles was an HBO staple for me as a young teen. It was actually kinda fun to play "Name That Movie" during the various montages. I still have my battle-scarred VHS tape of this film in my basement. Maybe I need to bust it out and reminisce...

I can't resist this movie, such a perfect time capsule! Oh, and I am obsessed with the music montage.

I definitely have fond memories of this, and also 'It Came From Hollywood' which was a similar movie that focused more on fifties and sixties low budget sci-fi and monster movies.

Filmfather, Kindertrauma, Bob - thanks for the comments, guys! I totally agree, this is an easy film to reminisce with. It's just funny to watch an overview of 'modern' horror that predates so many established icons of the genre - like Freddy Krueger, Pinhead, Chucky, the Scream films, Blair Witch, and so on (and some of these are already on their way to remakes!). I don't know about you but to realize that there's a whole generation (or two) of horror fans in their teens and twenties who have never known a world that didn't include many of the films that have appeared since Terror in the Aisles makes me feel more than a little old!

I loved this movie as a child. I, too, played the "name-that-movie" game and could quote every line Pleasence said. I have the original one sheet, which reminds me I should really get around to framing that.