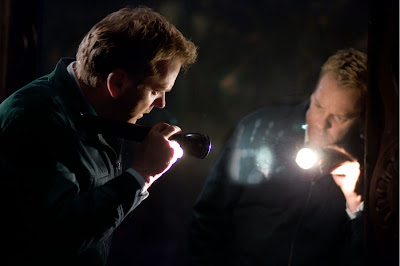 Director Alexandre Aja's supernatural shocker Mirrors is likely to earn plenty of derisive hoots from both mainstream reviewers and the genre press. But I hope I'll have some company on the other side of the looking glass when I say that I got a really big kick out of this. If you're only going to see one bad movie about evil mirrors this year, please make it Mirrors because no one else is going to top it, believe me.
Aja first made a name for himself with his French shocker Haute Tension (2003) then successfully made the leap to the US with his remake of The Hills Have Eyes (2006). Both of those movies earned their share of accolades from the horror community but neither film quite did it for me personally. Yes, the violence was spectacular - but on both counts what should've been tense, gritty, close-to-the-bone tales badly unravelled. Mirrors, on the other hand, is a crock right from the start. To me, that makes it more of a party. This is a movie that can only get more and more inane. And by God, it does.
As Mirrors unfolds, it's clear that Aja intended this to be the premiere evil mirror movie, the final word on this subject (watch your back, Poltergeist III!) and anyone who wants to take a foolish dream like that all the way to the wall deserves to have me on their side. There's not a lick of an apologetic tone here. Aja is 100% committed to making the best scary mirror movie he can. He doesn't even want to stop at mirrors - any reflective surface is a potential way for evil to find its way into our world. In hindsight, Aja probably should've reined the screenplay (co-written with his regular partner Gregory Levasseur) in a bit and done a better job of establishing a clearer set of rules for how the evil presence in his film operates. But then if he had, this movie would've been a little less cracked (heh!) than it is and that's not a trade-off I'd have been willing to see. Mirrors' story is a complete pile of nonsense, but it's an entertaining pile of nonsense. It's the warped funhouse mirror reflection of a potentially better movie. Or possibly vice-versa. With mirrors, it's so hard to tell.
Kiefer Sutherland stars as ex-NYPD detective Ben Carson, who was dropped from the force after accidentally shooting a fellow officer and who now works as a night watchman at an abandoned, fire-gutted department store (stunningly depicted by production designer Joseph Nemec's sets) while temporarily crashing on his sister's couch. In the meantime, he's trying to mend his relationship with his estranged wife (played by Paula Patton) and their two kids. So this is the worst possible time for Ben to be dealing with a supernatural force trying to push its way into our world, using him as an unwilling conduit.
Had anyone else played Ben, Mirrors might've lost a good deal of its appeal. But for those, like me, who never tire of watching Sutherland explode ("Goddammit!"), this is gold. Some will write off Sutherland's performance here as a lazy continuation of his Jack Bauer shtick but for me, even if that's all he's doing, that's cool because there's no one else around to do it. I don't know why seeing Kiefer Sutherland in pissed off mode is so enjoyable to me, it just is. Mirrors wouldn't be half as much fun without him in the way that the original Amityville Horror (1979) wouldn't have been half as much fun without James Brolin. And while Sutherland's got some horrendous dialogue to deliver here, he never seems put out or embarrassed to be saying any of the dumb things he's asked to say - and that makes him a stand-up guy in my book. Aja's lucky to have him in his corner.
Initially, Aja probably meant for Mirrors to be a Shining-esque chiller, with a more psychological brand of scares than he'd gone for previously, but apparently he couldn't help but cover his ass with some gratuitous violence, which KNB's Greg Nicotero and Howard Berger deliver in spades. This was definitely a smart move on Aja's part as Mirrors' nastier highlights leave a strong impression. And Aja also can't help but ratchet up the action in the finale, which is totally jarring but in a good way. Sutherland's final throwdown with the evil behind the mirror might blow any chance of taking this movie seriously out of the water but that shipped had already sailed. If Mirrors' climax had been a low-key affair it would've made me think that Aja didn't really know what kind of movie he was making. Thankfully he totally did and that means we get to see Sutherland do his best Bruce Campbell as he battles what looks like the pit hag from Army of Darkness (it wouldn't have been out of place at all to hear Sutherland say "This is my boomstick!"). I also liked the film's coda, which delivers a hokey but satisfying Twilight Zone-ish sting.
Supernatural horror is clearly not Aja's forte, he's more of a visceral guy (next year's Piranha 3-D is going to destroy!) but after years of seeing one PG-13 remake of a J-Horror film after another pedal the same soft scares, Mirrors (a loose remake of the 2003 South Korean film Into the Mirror) automatically earns my gratitude for telling the likes of Pulse, Shutter and One Missed Call where to shove it. This may be a silly movie, for sure, but I was thoroughly entertained by it. A reflection of my own loose standards? Maybe. But when I looked into Mirrors, I liked what I saw.
Posted by Jeff Allard at 11:43 PM

I pretty much agree with everything you said. This is the best bad movie since the 2006 'Wicker Man' remake. Sutherland was in full Shatner mode, and Aja once again shows that logic and believability are foreign concepts to him. Great trash.

I'm glad to hear you liked it, too! I've read some Mirrors reviews today since posting this blog and almost all of them cite how bad Sutherland is and how he's just doing an extension of Jack Bauer but man, to me his performance is a huge part of what I liked about this! I'll definitely revisit this one eventually, if not in the theaters then on DVD.