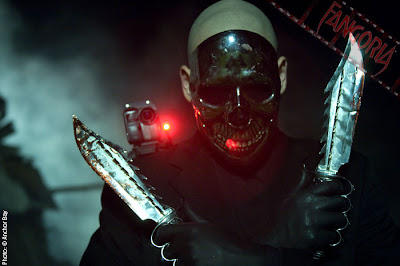 I know it's early in the year, but the award for Most Rad Horror Villain of 2009 has to instantly go to 'Chrome Skull' from the upcoming direct-to-DVD slasher pic Laid To Rest (due April 21st from Anchor Bay). If Russell Mulcahy had directed a slasher movie in '83, this would've been the villain and you would've never seen him in a shot that wasn't backlit with shafts of blue light and tons of smoke. I don't know what Chrome Skull's story is - if he's just a psycho, some kind of occult powered demon, or whatever - what this gentlemen has, is a look. How that look will be in action, who knows, but I'm ready to check it out (and I sincerely hope a disco ball is spinning somewhere during the climax of the movie 'cause it'd look sweet bouncing light off Chrome Skull's mask). Whether this'll turn out to be a start of a new horror franchise or not, I think even if Laid To Rest doesn't generate interest in a follow-up, Chrome Skull's look is so cool I suspect there might be a market for a show called Pimp My Slasher.
Posted by Jeff Allard at 4:18 AM

Email ThisBlogThis!Share to TwitterShare to FacebookShare to Pinterest
Labels: Laid To Rest