Underworld 3: Rise of the Lycans 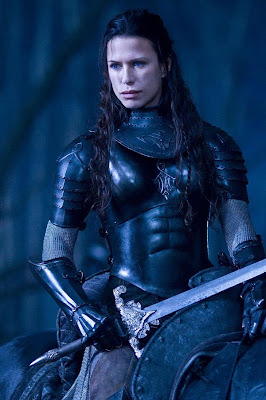 I came to Rise of the Lycans not as a fan of Underworld but as someone who fell asleep while watching the first two films. Clearly this series has its fanbase and I wouldn't knock someone else's favorite franchise but until now they just haven't been for me. But this new one entertained me so much that I actually stayed awake through the whole thing and that's a first for me and Underworld.
As a tale that delves into the backstory of the franchise, I'm sure that there's plenty of Easter Eggs to be had for fans of the first two films but none of that had any impact on my viewing. For most of the movie, in fact, I was trying to figure out whether the character that Rhonda Mitra plays was supposed to be the character that Kate Beckninsale plays in the first two Underworlds (she isn't).
What I liked about Rise of the Lycans was its direct, mostly mumbo-jumbo free, storyline focused on a doomed love affair. There wasn't a lot to do with the internal politics of vampire society outside of the fact that they aren't the most enlightened customers when it comes to werewolf rights. They keep Lycans as slaves and forbid any co-mingling between their species. Talk about living in the Dark Ages.

Obviously this separation won't last and when it gets out on the street that vampires and werewolves are two great tastes that go great together, the old way of life will be over. Ground Zero for this change is the romance between Rhonda Mitra's aristocratic vampire Sonja and Michael Sheen's noble werewolf slave Lucian. Doing all he can to hold back Nature Itself is Bill Nighy as Sophia's dad Viktor, the Official Head Dick of all Vampires.
On the acting front, Nighy doesn't even try to give a restrained performance and that's probably a wise move. His character is an imperious, constipated douchebag and watching him lose his cool proves to be fun. Mitra and Sheen are an effective pair and while their romance may not be one for the ages, their relationship manages to not be a drag on the film and that's accomplishment enough.
Rise of the Lycans is FX-whiz Patrick Tatopoulos' first directing gig (having performed FX duties on the first two Underworlds) and he does a handy job here. I'm not into the CG transformations of the werewolves but their final form looks pretty sharp and while I was worried that the storyline would dictate that little would happen until the big revolt, as it turns out Rise of the Lycans has plenty of action to go around.
Everything comes together at the end, with Tatopoulos and screenwriters Danny McBride, Dirk Blackman and Howard McCain giving their film a satisfying climax of its own while setting up the events of the first Underworld. Armed with this backstory, I don't feel motivated to revisit the other films but I did have a good time with Rise of the Lycans

It's always fun when vampires bite off more than they can handle.
Posted by Jeff Allard at 9:35 AM

Email ThisBlogThis!Share to TwitterShare to FacebookShare to Pinterest
Labels: Underworld 3: Rise of the Lycans