Don't Take Your Pick-Axe For Granted 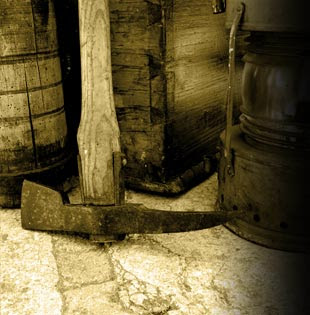 In the original 1981 My Bloody Valentine, the filmmakers followed the then-current mandate of slasher cinema in that psychos weren't allowed to stick to just one weapon. Instead they had to improvise completely new moves for each victim. It was like a carnage challenge - "Ok maniac, you can only use the existing items in this ordinary kitchen to accomplish a kill. Will it be the potato peeler, the cheese grater, or the meat thermometer?" Even though the original MBV's killer started a body count with a perfectly good pick-axe, the trends of the time demanded that he forget that and grab a nail gun or shove a dude's face in a pot of boiling water.
My Bloody Valentine 3-D doesn't go that route, though. Instead, in MBV 3-D, they show just how creative you can get with just one weapon at your disposal. I totally lost track of the body count in this movie 'cause it was so enormous but I know that a pick-axe was responsible for each and every slain sucker. Pick-axe mayhem has never been so dramatically depicted on film as it is here. If a murder weapon could have its own infomercial, this would be it. I even think at one point in MBV 3-D, the pick-axe got behind the wheel of a car shit-faced drunk and killed a few people on the road. It never stops finding ways to take a life.
People always associate Friday the 13th's Jason with his machete but while Jason always goes back to that blade, he never totally commits to it. MBV 3-D throws down a professional challenge to other slashers to develop a monogamous relationship with their weapon. Most slashers are like men afraid of marriage - they want to have that steady relationship to fall back on but they also want to be free to play the field. They're afraid that if they just use the axe all the time, or the machete, or the butcher knife that life is going to get stale. MBV 3-D retires that myth and says to other slashers that it's only insecurity that keeps you reaching for the next power drill or set of gardening shears. If you never bond with that one special weapon, you're never going to be complete. And that's its own kind of Hell.
Any slasher can use a weapon once and leave it behind but to find one that you refuse to kill without, then sir, you've got something special. In fact, after multiple rampages you might be surprised to find your weapon has taken on a mind of its own.

And when that happens, well, don't let go until they pry it from your cold, dead hands.
Posted by Jeff Allard at 10:14 AM

Email ThisBlogThis!Share to TwitterShare to FacebookShare to Pinterest
Labels: My Bloody Valentine 3-D

"MBV 3-D throws down a professional challenge to other slashers to develop a monogamous relationship with their weapon. Most slashers are like men afraid of marriage - they want to have that steady relationship to fall back on but they also want to be free to play the field."

Brilliant, Jeff! Sounds like the perfect thesis for an essay for Butcher Knives & Body Counts...

There was actually one kill at the start that was made with a spade. But that was during the "10 years ago" time so we can work around that ;)

Vince - thanks! Maybe I should hurry and get going on that! And Dex, good catch on the spade kill but Harry does use his pick-axe to hammer the spade in so technically the pick-axe was still involved!