A Myriad Of Malevolent Mirrors 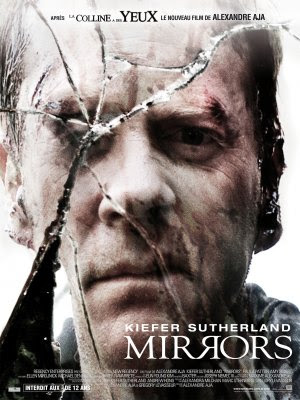 Last summer's Mirrors was touted as "The Horror Event of the Summer!" but even in a summer that included competition as weak as the much-disparaged The Happening (a film I haven't seen myself yet) few felt director Alexandre Aja's film lived up to that hype. But I took an instant shine to this silly movie when I saw it in theaters last August. So much so that I included it on my top ten list for 2008. Yeah, it probably didn't belong there but damn it, I'll never stand in shame at my preference for any film - especially not in a world where some people think it isn't ridiculous to like the Saw movies. But with Mirrors now on DVD, I wanted to see how well it stood up to a second look.
Well, while I didn't discover that it had gotten any better, I did find that I still liked it just as much. Kiefer Sutherland as the lead helps a lot. As Ben Carson, an ex-cop who was forced to retire from the force after he accidentally killed someone in the line of duty and who is also dealing with a separation from his wife and children, there's ample opportunity for Sutherland to get volatile. He snaps into anger mode on a dime, and I like that. He does pissed-off better than anyone else. I could watch a whole movie of Sutherland losing his shit with people and, with Mirrors, I guess I already have. He even gets up in a nun's face, threatening her at gunpoint, and that's great stuff. Of course, all these encounters begin with Sutherland trying to be reasonable and even-tempered. But there's a short clock on that approach and as soon as a conversation turns the least bit difficult, he unleashes.
When he's not exploding in a blind rage, Ben is all alone in the torched department store where he works as a night guard. And what a place this is! When it comes to ghost stories and haunted house movies, I'm a sucker for a great location and Mirrors is a winner on that count. The set design is stellar and watching Sutherland exploring these enormous, burned-out rooms with just a flashlight crossing over ash-covered mannequins, display cases, and gigantic mirrors is totally satisfying to me. What can I say - I'm an easy customer.
And after so many PG-13 remakes of Asian horror films, I took pleasure in seeing one that went out of its way to deliver R-rated supernatural splatter - even if it wasn't in the film's best artistic interests. There's the potential for an eerie, suggestive ghost story here that Aja blindly runs roughshod over, turning Mirrors literally into a bloody mess - but that only made it more endearing to me.The already infamous death of Amy Smart's character is a hideous show-stopper, for instance, but what's especially great about it is that it makes absolutely No Sense. Of all the ways for one's mirror image to inflict death, to tear your lower jaw off (!) is - pardon the phrase - a real stretch. I took it as Aja paying fanboy tribute to the 'face-ripping' scene from Poltergeist - a scene that plays out, of course, in a mirror (with all its influences, Mirrors is a jagged collection of cinematic shards). And Mirrors' finale, in which Ben has to fight for his life against a leaping, lunging horror hag straight out of Army of Darkness, is the way more horror movies should end. Just when it looks like the movie's over - bring in a horror hag. It doesn't matter what story you've been telling up to that point, because only a jerk wouldn't want to see a horror hag. Especially one that can jump straight from the floor up to the ceiling and crawl along the side of walls.
I understand that these may not be solid grounds to praise a movie but that's fine. What we like is an inescapable reflection of who we are, even if that reflection is sometimes cracked.
Posted by Jeff Allard at 1:08 PM

I'm hoping to watch this sometime this week. I've heard mostly bad things about it, but it seems like the type of movie that would have come out 25 years ago and that's a plus for me. I rewatched the '88 version of "The Blob" the other night and started to feel like horror movies have been too serious in recent years. "Mirrors" sounds ridiculous enough to fill the void.

It's definitely not for everyone. But if taken in the right spirit, it's a fun, nonsensical shocker.