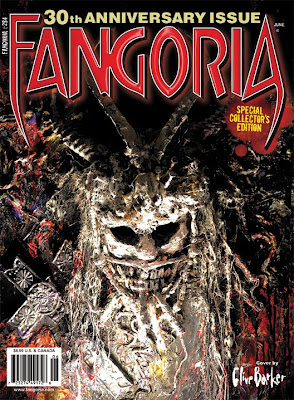 The occasion of Fangoria's thirtieth anniversary is likely to make the magazine's old-school readers aware of their own encroaching mortality more dramatically than any horror movie could. After all, thirty years is a serious chunk of time and I'm sure I'm not the only one old enough to remember Fangoria's 1979 debut who feels as though the last thirty years have gone by impossibly fast. But even if thirty years is a sobering number to process, the good news is that three decades later, Fangoria is still the premiere horror mag in the world and their anniversary issue (on sale now) celebrates Fango's vast impact on the genre with new interviews with a Who's Who of Horror. 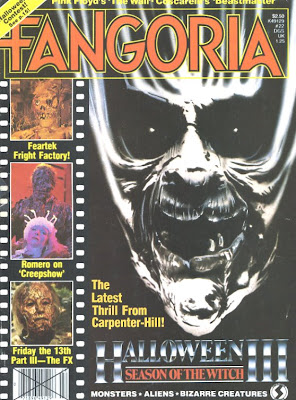 The first Fango I bought was issue #22 (pictured above). I had been aware of Fango since the beginning but was forbidden by my mother from buying it. I would always thumb through issues, though, when I saw them at the local supermarket (we lived in very different times back then, clearly, as I can't imagine seeing Fango at any supermarket today. For awhile even the Jane Alden convenience store at the end of my street proudly carried Fango and I vividly remember seeing the cover for issue #12 - featuring the severed head of Mrs. Voorhees from Friday the 13th Part 2 - in their small magazine section next to the likes of US Magazine). Although I eventually would come to own all the back issues I missed, it was agony at the time to see the Motel Hell cover (issue #9) and have to leave it behind just because my mother believed that a magazine with a man in a pig mask wielding a chainsaw wasn't appropriate for her eleven-year-old.
By the time issue #22 came out, though, I was thirteen and way too old for my mother's backwards attitude (the fact that it took me until I was thirteen to grow some balls about this is sad in itself). While on my own at a local magazine shop (part of a now long-defunct chain called The Newsstand) I saw #22 and with its articles on Creepshow, Halloween III and Friday the 13th 3-D, I wasn't going to pass it up. I was my own man, damn it!
I haven't missed an issue since then and I still consider Fangoria to be the single most valuable source in keeping the horror community informed. Its Canadian rival, Rue Morgue, seems to get more love from younger fans but with respect to the good writing featured in RM, I think it's not as essential as Fango. Fango takes a lot of flak for covering the kind of mainstream offerings that RM usually avoids but if Fangoria had been as particular as Rue Morgue is, just think of how many horror films over the last thirty years that would not have received the coverage they did. Certainly franchises like Friday the 13th, Halloween, and A Nightmare on Elm Street wouldn't have been granted the same kind of attention. Some might see Fango as 'selling out' everytime they cover a major studio release but whether they're writing about Maximum Overdrive or Hellraiser or The Unborn or Drag Me To Hell, Fango is doing what it's always done - keeping horror fans in the know on everything that's out there. Not just what might considered cool, but everything. And to complain about the attention that Fango pays to studio films is to ignore the tireless championing Fango has done since their start on behalf of independent and foreign fare.
I love that when you look through Fango, you see that the same regard is given to the likes of C.H.U.D. and Mirrors as to Blue Velvet and Martyrs - every film, regardless of its pedigree, is treated fairly. To me, it's that equitable attitude that makes Fango indispensable. Fango continues to celebrate every corner of the genre without prejudice and that's something every fan ought to applaud them for. When it comes to horror, Fango doesn't discriminate. They show respect to all genre films, even when it's not considered fashionable to do so.

Thanks, Fango - here's to the next thirty years!
Posted by Jeff Allard at 3:07 AM

Fango definitely was a lifeline for young horror fans in the pre-internet era, and if only for that it deserves respect.

It took me a little longer than you to man up and start buying it, but oddly enough I remember reading Fango's parent publication Starlog in my elementary school library. It wasn't as in your face since it focused more on sci-fi, but they still had some cool coverage of movies like Carpenter's 'The Thing', and I remember reading an interview with Dr. Who's Tom Baker where he used the term "whippet shit". Can't imagine a school library letting second graders read that today.

But yeah, I definitely read me some Fangoria (and Gorezone) through horror's heyday in the mid eighties on into the lean years of the nineties when they used to have a regular feature called "It's Not a Horror Movie" or something along those lines that would cover movies that the studios were trying to pass off as "thrillers" because calling something a horror movie wasn't marketable at the time.

Hey Bob,
I'm glad to know I wasn't the latest bloomer on the block when it came to starting a Fango collection! As for Starlog, I was never an avid reader of that for some reason. I would always flip through it at the bookstore but hardly ever buy it. In its thirty some-odd years of publication I could list the numbers of Starlog issues I ever bought on two hands with a few fingers to spare. Still, I was bummed to see that it ceased publication recently. I thought there'd always be a Starlog on the stands.

And yeah, the '90s really were lean times for horror. I give Fango head honcho Tony Timpone props for keeping the flag held high for horror during those years. Horror was a dirty word back then and Fango's "It's Not A Horror Film" feature was often the only way to get the makers of 'psychological thrillers' like The Crush or The Temp to consent to have their film covered in a horror mag like Fango.