Not A Good Egg 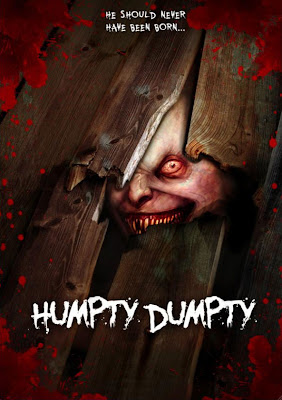 I don't know what it is about the just-released promo images from the upcoming 3-D creature feature Humpty Dumpty that have me so goofily pleased and anxiously awaiting director David Ellis' follow-up to this summer's Final Destination: Death Trip 3-D. I know that the premise is terrifically tasteless - a female alien is raped by rednecks and the human/alien spawn that results goes on to cause a world of hurt. That's great to begin with - perfect fodder for a monster movie - but these early teases are, well, awesome. Maybe it's just that seeing actual illustrations makes me think of the days before Photoshop took over from artwork on poster design - and also of the days when a monster movie's greatest selling point was agreed to be its monster. It's also true that I tend to have a irrational soft spot for it when filmmakers delibrately try to launch a franchise character (as the title of this blogspot attests). In fact, I'm already anticipating my favorite movie of 2016: Humpty Dumpty in Space. With that in mind, how could I not be rooting for Humpty Dumpty to succeed?
For more on Humpty Dumpty, see their MySpace page.
Posted by Jeff Allard at 3:20 AM

I agree! This does look and sound pretty amazing. There hasn't been a good original horror character on the big screen in a long time. I only hope it's not full of CGI and instead has some great practical FX work.

I have a feeling this'll stick more to practical effects but we'll see. I just hope they put this on the fast track because it's just not fair to keep the world waiting for Humpty Dumpty!

The amazing tag line says it all, "He should never have been born!"

I hope there's a scene when Humpty has sex with an unwilling female and tells her, "Its time to get Humpted!" Then "The Humpty Dance" could play during the scene!

Hell yes, the Humpty Dance needs to be in there! But he has to get "busy in a Burger King bathroom."