Werewolf: The Series On DVD! 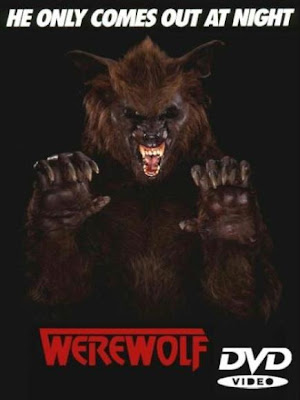 For years and years I faithfully attended horror conventions with my pals but of late my need to get out there and stroll the dealer tables has faded. Most of that is due to the responsibilities of a family but there's also the fact that the stuff that was once a staple of the bootleg circuit has been made available through legit means. Case in point: the announcement that Werewolf: The Series is now coming to DVD.
TV Shows on DVD reports that the short-lived 1987 show is being released by Shout! Factory. On September 1st (date subject to change), all 28 half-hour episodes of the show - along with the two-hour pilot - will finally be on DVD. It's been years since I've watched any of Werewolf: The Series - the last time I picked up a copy of the series at a con, the shoddy quality of the VHS dupe discouraged me from sitting through much more than five minutes of it. But I have very fond memories of keeping up with the show back in the day. With a premise that was like a lycanthropic version of The Incredible Hulk, with a young werewolf scouring the country for a cure for his condition all while being hunted by an older werewolf (played by veteran actor Chuck Connors), Werewolf: The Series had all the makings of a long run but sadly was an early casualty of the initial Fox Network line-up. The werewolf itself was created by FX god Rick Baker and whatever the show's faults, it was a blast to have a weekly dose of werewolf action on TV.
I just hope when I finally watch this again that it'll hold up better than Swamp Thing: The Series (1990-1993) has. I got that set when it was released on DVD, with memories of the show (which originally aired on the USA Network) as being kind of/sort of ok only to find that, aside from the cool Swamp Thing suit that improved over the movie version, the show was completely unwatchable. I'd be a little heartbroken if that's the case with Werewolf but I have a feeling I'll develop a serious case of full moon fever once I watch it again.
Posted by Jeff Allard at 4:42 AM

Email ThisBlogThis!Share to TwitterShare to FacebookShare to Pinterest
Labels: Werewolf: The Series

Very cool news. Last year, we got the 1st season of "Friday the 13th: The Series", and then 2nd season earlier this year. We just need the 3rd and final season, I will be one happy fanboy... er, aficionado. :)

Yeah, I'm a huge Friday the 13th: The Series fan too. Hoepfully the third season set will be announced soon. Even though some of the show's chemistry was lost with the departure of John D. LeMay, I liked the move towards a darker, more serious tone that last season had.

Jeff: Yeah, the chemistry was off, and I think LeMay's departure did hurt the showever, in a way. But Paramount jumped the gun by cancelling it. It could have gone on for a few more seasons, at least.

I loved Werewolf and watched it all the time when I was a kid, so this certainly is great news.

I have seen some of the episodes over the past few years, and they still seem to hold up pretty well.

They feel a little on the soap opera side, but if more soaps had Werewolves in them I would be a stay at home mom!

And I have to add that Ryan turning into a little kid crushed all of my dreams!

Wings, Friday would've lasted longer but sadly, pressure from the religious right made Paramount decide that the show was more trouble than it was worth. If only Paramount hadn't knuckled under to a bunch of zealots, who knows how long the series would've gone. On the other hand, at least it didn't run itself into the ground. Maybe three seasons was the right number for that show.

Matt, I bet you'd do well as a stay at home mom. If only more shows had werewolves in them to make that happen. And yeah, Ryan as a little kid was one lame exit for that character.

I would have at least liked a "final" episode, let Micki and Jack get the last antique back.

As for Ryan's departure, I can see why the writers did that. Ryan had started as such a young, carefree "kid", and through the course of his experiences there, had suffered so much. This was a way to give him a fresh start. AND the character was still out there, alive, available should LeMay ever be enticed back. Sadly, it never mattered.

As for how Ryan departed the show, I can see some merit to it but on the whole I don't think it was the best way to let him go.