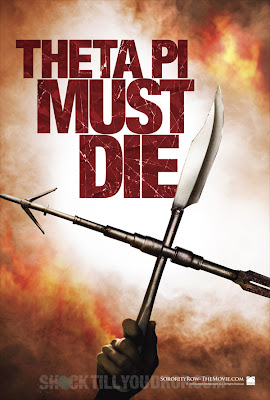 The teaser poster for Sorority Row has been released and it looks like the film's stylized weapon - a modified tire iron - is going to be a focus of the movie's campaign. Seeing as this is usually the type of film that would be looking to exploit its attractive cast of young women first and emphasize its slasher element second, I'm good with this teaser poster. It definitely looks better than any of the posters that have been released so far for Rob Zombie's Halloween 2. It's a sad day when Michael Myers is less exciting than a tire iron but as a slasher fan I'm more jazzed by the sight of a pimped out weapon that promises some inventive slaughter than I am of a dude who looks like he ought to be pushing a shopping cart full of cans.
Posted by Jeff Allard at 4:17 AM