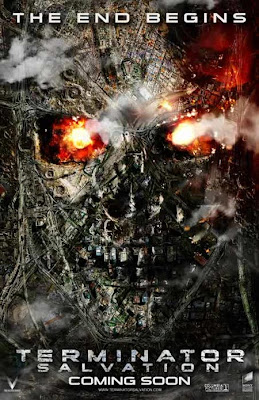 Based on the vitriol that Terminator: Salvation has been receiving online - as a headline on Ain't It Cool News blares: "Harry releases the flaming turd of the the review he's clenched for two days!" - I thought that Terminator: Salvation was going to be a debacle on the level of Joel Schumacher's Batman and Robin (1997) or the Will Smith Wild Wild West (1999) movie. But to my surprise, with some minor reservations, I really liked this. I'd never call it great but as a sci-fi action barn burner, it gets the job done just fine. Better than most, in fact, as director McG comes through with some of the most thrilling action scenes in recent memory. The various designs of the lethal machines here - from those that tower over buildings to slithering metal snakes that travel underwater - are outstanding and McG's direction shows these creations off to maximum effect.

The script for Terminator: Salvation isn't all that - unexpectedly sidelining Christian Bale's John Conner - but still ranking as a briskly paced action tale. The film's real main protagonist is the taciturn Marcus (Sam Worthington), a convicted murderer, and I thought he was a solid, if not quite galvanizing, lead. I am disappointed that the big plot twist with his character is revealed in the trailers as it spoils one of the few real surprises that the film could've sprung on audiences. That said, I liked Worthington's performance and whereas Bale's John Connor comes across as something of a blank, I thought Worthington and Anton Yelchin as the young Kyle Reese (the character that Michael Biehn plays in the first Terminator) gave the film enough of a heart to go along with the metal crushing mayhem.

I've seen a lot of summer movies that were truly terrible given a pass by critics so it's hard to figure why this franchise reboot has incurred so much wrath. Maybe critics have a mad-on for McG or they think Bale deserves to fall on his ass a little. Who knows. Maybe they just didn't like the movie. I do know that I was surprised by how much I enjoyed Terminator: Salvation. I haven't seen Wolverine or Star Trek yet so Terminator: Salvation is the start of my summer movie season. Turns out to have been a good choice to go with.
Posted by Jeff Allard at 3:36 AM

I agree with you about Worthington and Yelchin, their characters are the most interesting aspect of the film, and both actors give good performances. And there's no doubt the special effects are top notch. For me the big problems were the script, which had too many lapses in logic even for a summer popcorn movie, and McG's direction, which made many of the action scenes seem confusing and obnoxious to me. I feel like a cranky curmudgeon, but this year's crop of summer movies just hasn't done it for me.

Going into TS with rock bottom expectations probably helped it play better with me. As far as the action scenes go, I felt like for the most part I could follow what was going on and where each character was in the scene. I doubt if I'll be able to say the same when Transformers 2 comes out.

As for the summer movie season, hopefully Drag Me To Hell will turn the train around next week.

Observation: The fact that Christian Bale is turning into a male diva shone through his performance in Terminator Salvation, the two other main guys were good though

Yeah, this wasn't Bale's finest hour as an actor, that's for sure. I'm sure he'll come back strong in something else, though.