At The Bottom Of A Black Hole 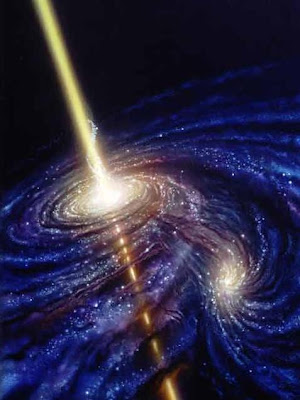 Thinking recently about the random things that used to prey on my mind as a too-nervous kid, a long lost fear has suddenly come back to me - the cosmic phenomenon known as black holes. Even though there were no lack of things in my immediate vicinity as a child to worry about, the existence of black holes somewhere out in the great gulf of space seemed too important and deadly to ignore. The idea of black holes was so terrifying to me that even the teaser for Disney's The Black Hole (1979) was as unnerving to me as any horror trailer.

The fact that something existed in nature that could mindlessly absorb life and light on a massive scale seemed like proof that the universe had it in for us. My high-ranking fears of an asteroid colliding with Earth - or at least coming close enough to knock us off our orbit and send the ecosystem into disarray - were penny-ante in comparison. At least I had hopes that I might survive an asteriod collision, even if it were only for a short time until I'd become one of millions to perish in the harsh new conditions on Earth. That wasn't so terrible to imagine. You've got to die sometime, after all, and my name might've eventually been included on some memorial wall after the mutants took over and rebuilt society. But to disappear forever into a black hole offered no such comfort. You couldn't get any more gone than that.
I don't know when I stopped considering black holes to be a threat but I'm glad I learned to let it go. That's the thing about black holes - they pull you in.
Posted by Jeff Allard at 9:33 PM