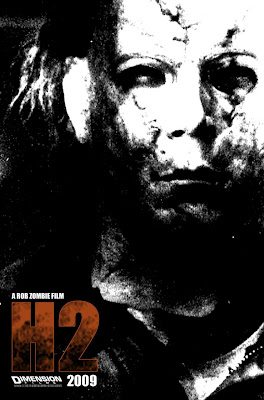 Despite his once-adamant stance that 2007's Halloween would be writer/director Rob Zombie's one and only trip to Haddonfield, the news just broke that Zombie will be filming Halloween 2 (aka H2) next year. My immediate thought to that is "Thank God another horror film can finally give fucking Saw a run for its money next Halloween!". Of course, that's kind of like having a mice problem in your home and letting snakes loose to take care of it but that's fine.
At the very least, Zombie doing his own follow-up means that the truly promising directors that were attached to this project - most recently, Inside helmers Alexandre Bustillo and Julien Maury - can move on to something more deserving of their talents. For another, this is the first time to my knowledge that a director has gone on to sequelize their own remake and that's an intriguing situation.

Word from Variety that Halloween 2 will chronicle "the aftermath of Michael Myers' murderous rampage through the eyes of the sister he hunted" doesn't really say much, however, and what it does say worries me. I just hope Zombie doesn't try to justify returning to the Halloween universe by going experimental and having the new film be some kind of psychoanalysis of Laurie Strode's traumatized mind. That's a waste of everyone's time. Now that the origin story is out of the way, just put Michael Myers on a full-out rampage. There's still room to do things differently than in the original saga but at the end of the day Halloween 2 has to be about Michael suited up in his overalls and mask, knife in hand, doing what we like seeing him do. If it isn't, it shouldn't be called Halloween 2.
To that end, here's my suggestions: first, kill Loomis off right away. Bring Malcolm McDowell back for an Adrienne King-like opening cameo. Have him living alone, bat-shit crazy and blinded after Michael gouged his eyes out in the last movie. Michael, of course, pays him a final visit and the opening credits roll. Once that's done, bring back Ken Foree's character of trucker Big Joe Grizzly as the new antagonist for Michael - a character who'd be more akin to Robert Shaw in Jaws than the traditional Loomis type. Sure it looked like Michael put a permanent end to Big Joe during their last encounter but this is a horror movie so who's to say this character couldn't have survived his injuries and emerged with a vendetta to carry out against Michael Myers? Michael caught him off-guard the first time but now Big Joe's ready for Round Two. For the last two years he's been watching, waiting, training his ass off. Now it's on. 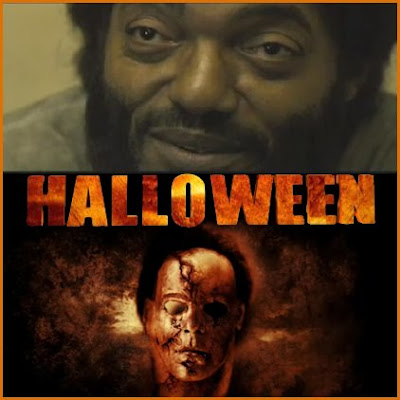 If this sounds ridiculous to you, listen: we've already seen six Halloween movies where Michael is pursued by Loomis - someone who could never pose any kind of physical threat to Michael and who's only purpose is to spread the word on Michael's evil nature. That's beyond tired. Now I want to see a Halloween movie where a total bad-ass is gunning for Michael, not some frail old dude but a guy who can really take it to Michael on his own terms. I also think it'd be cool to see this tough bastard who doesn't believe in shit like the Boogeyman slowly forced to consider that there's more than just a whole lot of crazy to Michael.
Of course, in Zombie's Halloween universe, I'm sure that Michael is still just supposed to be some burly psycho and not a supernatural force and that bringing Big Joe Grizzly back to grapple with Michael - taking their death-feud through the streets of Haddonfield - would be regarded as a cheesy move. Well, yeah. It would. But I also believe it'd be fun and that slasher movies - especially sequels to remakes of slasher movies - ought to be fun and not so full of themselves. I want to see a Halloween movie where Michael is in some suburban house, bearing down on his latest victim when suddenly a semi truck crashes through, horn blaring, taking off the back of the house and Big Joe Grizzly jumps out of his giant rig in a suit of homemade armour, ready to stomp the shit out of Michael. Goddammit, that's the Halloween 2 I want to see - the Night HE Got Rocked. And I'd also like to see Keith David cast as Big Joe's brother - someone even more bad-ass than Big Joe himself, some real John Carpenter-esque character like Napoleon Wilson who just broke out of jail. Shit, if Zombie doesn't want to bring back Foree because feels like it'd be cheesy to have him survive his Halloween injuries, just have David as Foree's brother, busting himself out of maximum security to avenge Big Joe's death. If that's what it comes to, I'd be cool with that.
I'm sure what Zombie has in mind for Halloween 2 is nothing like what I have in mind for Halloween 2 but until I hear for sure, I'll keep hoping that Big Joe Grizzly will be on the comeback trail next October.
Posted by Jeff Allard at 5:14 AM

Thanks, Bob - glad you think my idea's a winner! I'd be honored if Zombie stole it for his own but I get the feeling we'll be in for a dreary continuation of the Myers' saga instead, sans Big Joe Grizzly.

Howsabout if some mad doctor gets a hold of both Michael's and Big Joe's bodies... sews Michael's head on next to Big Joe's... and we get... not just a sequel to the remake of Halloween... but also a remake of the 'Incredible Two Headed Transplant'!!!???
(I'm ignoring that movie with Rosie Greer and Ray Milland).

Now THAT's a sequel I'd pay to see! Brilliant idea.

When you remake a classic, the only possible result is failure. Zombie's Halloween movies, with their white trash universe of characters, failed on every level. Rob humanized an inhuman killer, making him less scary in every way. He replaced tension with gore. As for the camera shaking, it's the kind of movie that makes viewers scream "please stop shaking the camera, let me see the scene!"