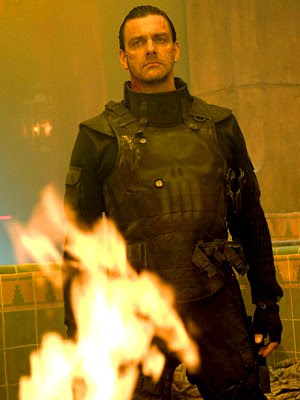 When I saw Rambo back in January, I was worried that it'd be an interminable wait until another film as rife with carnage would come to theaters. But here we are just under a year later and Punisher: War Zone has made the perfect bookend to 2008. For what it's worth, Rambo is the more serious-minded of the two films, addressing the very real atrocities occurring in Burma while Punisher: War Zone is in every way a gaudy comic book - from its stylized lighting to the arch approach to its bloodshed (as a criminal is exploded in mid-air by a missile, the moment takes place in front of a red neon sign reading "Mortey's" in which the last letters blink out, leaving only 'mort' - French for "death" - glowing in the night).
Some might carp that the violence of these films is more extreme than warranted but you won't hear that kind of talk from me. Hell, I'd be embarrassed to even think it. Professional critics are forced to see movies they may not otherwise be inclined to watch and it's inevitable that they might feel affronted at times (as when NY Times critic Janet Maslin walked out of the original Dawn of the Dead after ten minutes) but if someone consciously chooses to see the fourth Rambo or the third Punisher, then I believe they've abdicated the right to be offended. Unhappy, dissatisfied - fine. Offended, not so much. To see either of these movies and take issue with their violence is like seeing Titanic and being upset that the boat sank.
If there's a callousness to these films that some might find disturbing, well that's the price of war for you. When making a movie called Rambo or Punisher: War Zone, it doesn't pay to pull your punches. Or to insult your audience's intelligence by reminding them that violence doesn't solve anything.
Posted by Jeff Allard at 11:09 AM

It is kind of fun though... to see all the 'film critics' wringing their hands over the violence and cruelty.
I mean, back in the day, that alone was enough to get me to search out a movie... well... it kinda still is.
It was really surprising, and a bit worrisome, when... as a kid... I saw Siskel and Ebert give 'Two Thumbs Up' to Dawn of the Dead...
Though that did come in handy when my friend and I were trying to convince my mom to take us to see it (she did... and still brings it up from time to time as 'That horrible movie you kids tricked me into watching').

Oh sure, as a kid if I read or heard a review that trashed a film as being too violent that made seeing that movie a priority. But after so many decades of violent entertainment, though, I just wonder why anyone still bothers to get worked up over whether or not a movie is using violence with the proper sense of responsibility. I think it's been proven that well-adjusted audiences can handle anything that's thrown at them and not have their moral grounding irrevocably altered.